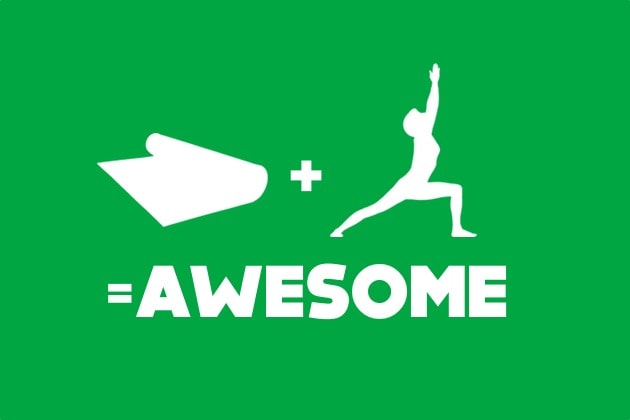 A recent jaunt to a Level 2 yoga class in the Big Apple left me feeling humbled. Actually, that’s a gross understatement. I felt humiliated. Surrounded by several shaved-headed bare-chested tattooed young dudes flying from front to back and side to side in a handstand-heavy flow, I briefly wondered if I got the time slot wrong. Did I accidently sign up for the Cirque du Soleil master practice?

Apparently not. Guess my idea of a Level 2 would feel like restorative yoga for these fellas.

I made it through the 90-minute adventure relatively unscathed, with one or two donkey kicks turning into a beautifully inverted mare, but more often ended up in child’s pose wondering where my mommy was. I couldn’t help looking around, comparing myself to others, comparing myself to my former self, and exhaling in a defeated heap on the floor.

Don’t be that yogi. You are fabulous no matter who or what else is happening in the room. Here are a few ways to escape the self-defeating heap I landed in that day:

Thank your body for showing up to practice. If you’re too shy to belt it out in an opening Ohm, a silent blessing of thanks will do. I think about all the crap my body has been through – bicycle crashes, overuse injuries from too many running races, headaches and bellyaches from the extra slice of pizza and glass of wine it really didn’t need – and I thank it for always bouncing back. Like my favorite phrase in the movie Seabiscuit, “you know, you don’t throw a whole life away just ‘cause he’s banged up a little.” I may be a little banged up, but as long as I can roll out my mat and breathe, I can practice yoga.

I know a few students who take their glasses off to practice. Yes, they naturally prefer not to fuss with steamy specs in a hot class, but they’re onto something. With less to see, there’s more to feel, and less tendency to compare. Got 20/20? Close your eyes. Or challenge yourself to looking only at a part of your body in every pose – top hand in Triangle, arch of the back foot in Devotion Warrior. You get the idea. You’ll be in Svasana before you even realize the Cirque du Soleil troupe is in the house.

3. Think About Someone Not In The House

A whole lotta folks would love to do what you do. But for myriad reasons can’t make it to class. When I get frustrated, or lazy, sometimes I think about a family member who is chronically ill and could only dream of what a Wheel would feel like right now. Or I think of workaholic friend who would love to focus on nothing but her breath instead of a never-ending agenda, if she’d only allow herself the opportunity to get to class. Don’t hijack your practice by not appreciating the simple fact that you get to BE here.

If you still can’t practice without comparing to others, practice alone. Just don’t let the mind float off into how much better yesterday’s practice felt. That’s comparing to your former self. Remember, we’re trying to avoid the self-defeated heap!