Nude Yoga For Men On the Rise 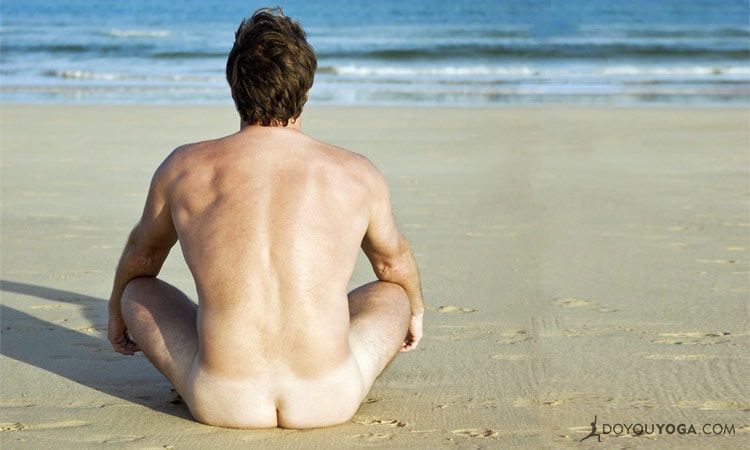 The idea of practicing yoga in the buff might cause some people to shudder in horror; for others, however, it’s an even more relaxing and authentic way to do yoga. Toronto’s Awaken Studio, a center for counseling and bodywork, is capitalizing on this trend by offering local men the opportunity to strip down and participate in naked Ashtanga yoga sessions.

“When people practice yoga without their $150 Lululemon pants, they are in their body,” Phillip Coupal, the owner of Awaken, tells the Toronto Observer. He says that it “levels the playing field” since clothes don’t make a person who they are; nudity boosts self-esteem by making the men more comfortable with their own bodies.

On Nude Yoga and Sexuality

Awaken is currently the only place in Toronto that offers nude yoga—not surprising, considering exercising in one’s birthday suit is still not a common practice. Perhaps this is because nudity often tends to make people uncomfortable; as one student in the naked yoga class notes, people frequently associate nudity with sex.

However, there is nothing sexual about nude yoga, although no one judges those who happen to get a little excited during class.

“It just happens. They are on their mat and nobody is looking, nobody cares…we are here to practice yoga; we are not here to have sex,” Coupal tells the Observer. There is no touching involved in his class, aside from when an instructor might have to make a small adjustment to a student’s posture.

Nude Yoga Classes For Men Around The World

As evidenced by its name, San Francisco’s Naked Yoga for Men is another place where nude yoga can be found. The studio emphasizes the non-sexual connection that the practice forms between men, as well as its accepting nature in regard to the body image issues that many men face in today’s society.

“Most of us are not… models and yet we hold ourselves up to that standard. This is one of the reasons this class can be so healing. People of all shapes, sizes, races, and physical abilities attend this class,” says the studio’s website.

Nude yoga classes for men are being offered by various studios in cities from Austin to Sydney, Australia; there are even men’s naked yoga classes available on sites like YouTube and Vimeo for people who prefer to strip down in the privacy of their own homes.

What do you think, guys? Does the thought of being pants-less in front of other people make you squirm, or would it make you more comfortable in your own skin?