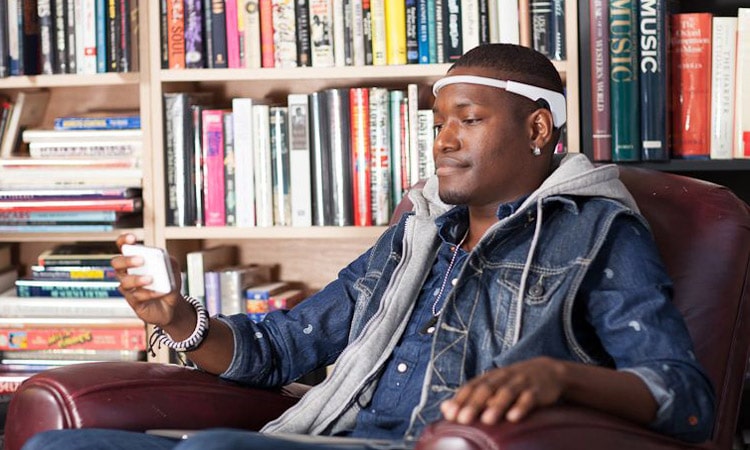 A new piece of wearable technology is helping users find their focus using their own brainpower—and a little help from a headband.

The Muse, touted as a “brain-sensing headband” by Gaiam, measures the electrical signals produced by the brain using seven sensors. It can detect all five bands of brainwaves.

Using an app called Calm—available for Android and iOS—and a Bluetooth connection to your Apple or Android smartphone or tablet (most Kindle Fire tablets work with the app as well), the Muse calibrates itself to your brain, then takes you through a three-minute meditation session.

During the session you’ll hear ocean sounds like waves, wind, and even birdsong; these sounds actually reflect your brain’s activity, so the calmer you are, the slower and gentler the weather will be and the more birds you’ll hear. Stormy winds and crashing waves mean your mind is unfocused and distracted.

The Muse is described as being like a heart rate monitor for your mind, since it picks up on the brain’s electrical signals during “focused-attention exercise,”—almost like a tiny EEG machine for meditation.

Muse users can track their performance and progress after each session, and periodic rewards and goals are built-in to motivate users to keep working on their brain strength.

Meditating for a Better Life

The goal is for users to use the guided meditation to train their brains to become more peaceful, more focused, and less easily distracted—resulting in reduced stress and anxiety, a clearer mind, a better attention span, and increased productivity and happiness.

Although the Muse’s $300 price tag may cause a small hitch in users’ peace and mental focus, one three-minute session can supposedly give you the effects of a half-hour yoga session. The sessions can also be bumped up to as many as 20 minutes each.

What do you think? Would a wearable device help you improve your meditation, or would a glowing screen and plastic headband be too distracting?