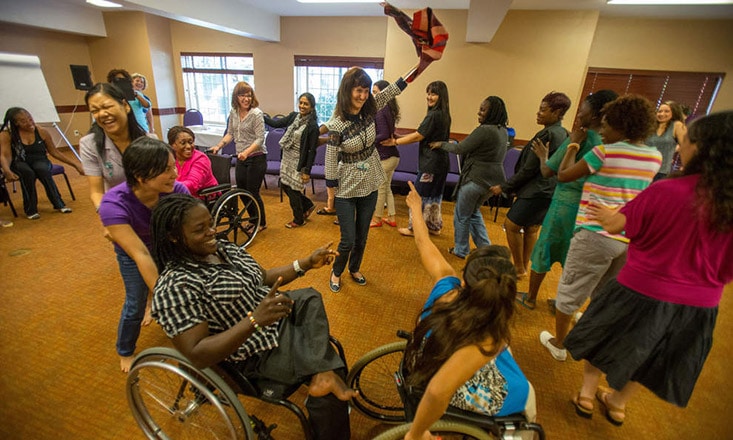 Mobility International USA, an Oregon nonprofit agency, is on a mission to advance the rights of people with disabilities. This year, yoga played an important part in that mission as the initiative introduced the practice of yoga to empower participants.

The Eugene-based group’s Women’s Institute on Leadership and Disability (WILD) held its first event in 1997, according to the Register Guard, and has since held seven. This year’s program included a brand-new Training of Trainers program, which aims to teach female disability activists from all over the world how to apply leadership skills in their native countries.

The 13-day program allowed 18 WILD program alumna to learn how to use their newly acquired skills to teach others what they’ve learned and take an active leadership role.

“The idea is they see what’s possible and then they go home and make changes,” said Susan Sygall, CEO and co-founder of Mobility International, who is herself a wheelchair user.

In many countries, women and the disabled are not taken seriously, and negative stereotypes often stand in the way of forward progress. One program attendee, Ekaete Umoh of Nigeria, tells the Register Guard that Nigeria doesn’t have the same kinds of legislation that exist in the United States to protect the rights of people with disabilities.

“We need to be training [!women!] to forget about those stereotypes,” said Umoh, who has a physical disability caused by polio.

During one session of the WILD Training of Trainers program, activists were able to practice modified yoga stretches and poses, reinforcing the idea that stereotypes shouldn’t prevent people with disabilities from trying new things.

After the program is over, each of the activists receives a $3,500 grant, along with new knowledge and techniques for empowering people in their own country.

Umoh, who participated in the WILD program in the past, is founder and executive director of the Family-Centered Initiative for Challenged Persons in Nigeria and the national president of Joint National Association of Persons with Disabilities, reports the Register Guard. Karine Grigoryan of Armenia has cerebral palsy, but was given new confidence after attending the WILD program in 2006.