Lululemon Is Releasing Their Own Craft Beer 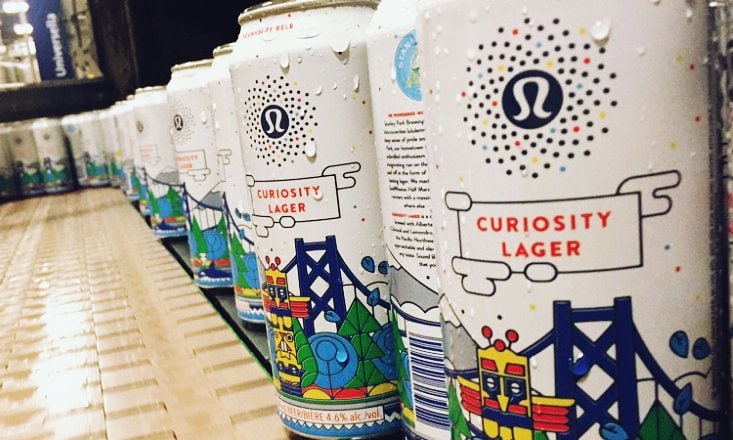 Renowned see-through yoga pant manufacturer Lululemon is branching out into a new venture: beer. The company will be launching its new Curiosity Lager on August 15 in Vancouver, according to Time Magazine.

Curiosity Lager is a “crisp, bold session lager” with a “citrus hop nose,” according to the CBC. The beer, brewed by Stanley Park Brewing, comes in a trendy 500-mL can printed with a stylized motif of Pacific Northwest-themed items: trees, totem poles, mountains, bridges, and water (no yoga pants, though).

Curiosity Lager will be released in a limited run of 88,000 cans, reports Time.

Why the Pacific Northwest?

Vancouver is the home of Lululemon, and the August 15 release of the beer happens to coincide with the city’s SeaWheeze Half Marathon and Sunset Festival, presumably so people can take a lot of carefully staged Instagram photos of themselves and this limited release beer during the festival.

Although Lululemon has traditionally been a more female-oriented company, Doug Devlin, marketing director for Stanley Brewing, told the CBC that he thinks Lululemon is “interested in talking to a more male beer-drinking crowd” with this new product.

As many others have pointed out, this could be an attempt for the company to branch out even further into the male demographic after former CEO Chip Wilson insulted women’s bodies in 2013 by saying, “Quite frankly, some women’s bodies just don’t work for [!our!]…It’s about rubbing through the thighs and how much you’re using it.”

However, that’s all in the past; now Lululemon has beer that you can buy and drink and forget about how your shameful thighs will probably only get bigger because you’re drinking beer, and then you have no one to blame but yourself, because it certainly couldn’t be the flimsy yoga pants that are the problem.

Or, if you’re a guy, drink Lululemon’s beer with no guilt whatsoever, because your body works just fine with yoga pants. Juuust fine. Drink up!