Lost In Sanskrit: Learning The Language of Yoga 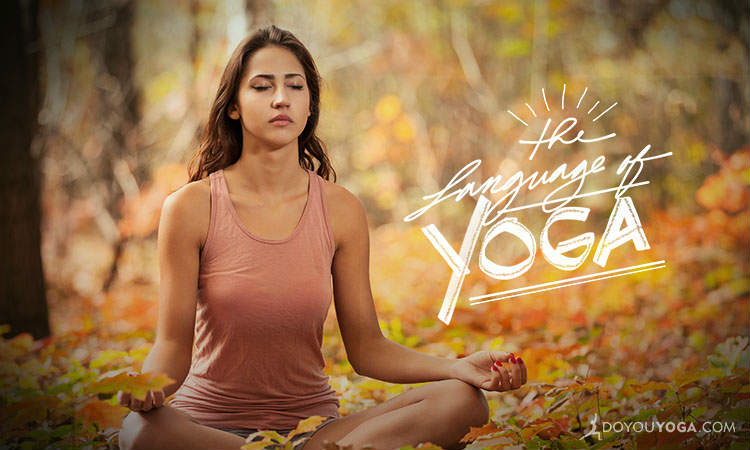 Many students new to yoga have questions about some of the Sanskrit terms that are frequently heard in a yoga class. I have had students approach me to ask the meaning of “Om” and “Namaste,” because they felt uncomfortable repeating something that they did not know the meaning of.

Whether it be for religious reasons or simply wanting to be informed of the meaning before you speak the words, it IS helpful to learn their significance.

Yoga Is Spiritual, Not Religious

Although it has ancient roots in Hinduism, yoga does not belong to any religion. It is a spiritual practice that encompasses all faiths. You can know and respect its origins, while maintaining your own religious beliefs. The universal message of yoga requires no religious classification; it is a practice of self-realization, transformation, and healing. Most Western yoga instructors are careful to respect the varying beliefs of their students, and cater to their diversity.

If you find yourself in a class that incorporates chanting mantras in Sanskrit, the instructor will usually inform you of the meaning of the mantra before you begin. If you are uncomfortable with the mantra’s meaning, just close your eyes and listen without participating.

The Meaning of Mantras

I always like to look up the meaning of mantras before I participate. Many mantras are simple, beautiful proclamations, like one of my favorites, “Lokah samastah sukhino bhavantu”, meaning “May all beings everywhere be happy and free and may the thoughts, words and actions of my own life contribute in some way to that happiness and to that freedom for all.”

Others invoke Hindu gods, so it is wise to educate yourself on the mantra’s meaning, and ensure that it lines up with your personal beliefs. Chanting can be a meaningful, moving experience, and it has a very grounding effect — assisting you to still and focus the mind.

Two words that you will most frequently hear in class are “Om” and “Namaste.” Om is often chanted in unison at the opening and/or closing of a class. Om is a sacred syllable, a vibration, sometimes described as “the originating sound of creation,” “the essential sound of the universe,” or “the name of God.”

Its traditional spelling is AUM, where the letter “A” represents creation, “U” the preservation of balance in the world, and “M” the completion of the cycle of existence. When we chant Om, we connect with something greater than ourselves.

Namaste on the other hand, is a greeting; both to begin with, and to end with. Its meaning is multi-faceted, symbolizing not only a reverence and respect for a fellow person, but also carrying a spiritual significance of recognizing and honoring the divine spirit in another. Simply stated, it means, “I bow to the divine in you.”

Definitions and Expressions of Namaste

There are varying definitions, all within the same vein. One very beautiful translation is, “I honor the place in you which is of love, of truth, of light and of peace.”

The physical expression of Namaste, the palms pressed together at heart center and the bowing down of the head, is a gesture of extending friendship in love, respect and humility. It is a way of saying that we honor the divinity within the person that we meet.

As you delve into your yoga practice, know that you can and should, make it your own. Allow the practice to align with your individual beliefs, and let it be your unique expression of your spirituality.