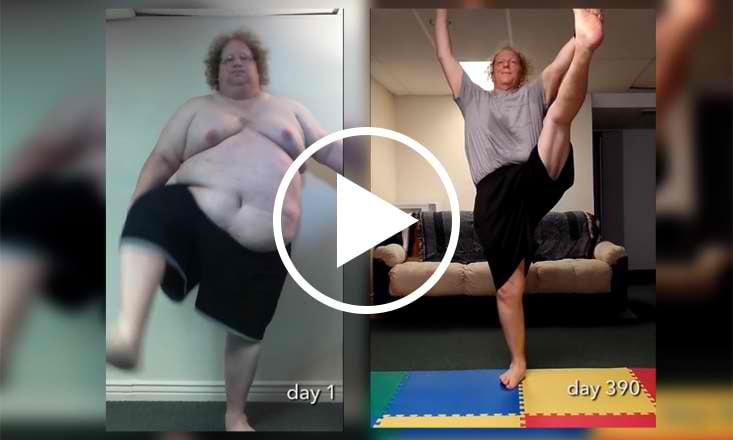 When Jared Mollenkopf sat down to write his first blog post detailing his weight loss journey, he weighed in at 510lbs. Only fifteen months later, he had lost 300lbs and completely transformed his life, inside and out—all thanks to the power of yoga.

Like many of us, Jared has struggled with his weight all his life. Growing up, food was a source of comfort and stress relief, especially when he was bullied because of his weight. For years, his doctors warned him that his obesity would kill him, causing a heart attack or stroke. But even though he knew intellectually he had to change, in his heart he felt too hopeless and helpless make those changes to his lifestyle.

Then, just after his 40h birthday, something clicked. He doesn’t know exactly what triggered the change in his mindset, but on the day he started his yoga journey, he knew that he wanted to live.

Jared cut all sugar from his diet and began practicing yoga daily with online yoga videos. At first, he had trouble even lowering himself to the ground and turned the video off after only five minutes. But as any new yogi knows, yoga has the power to change your mind as much as your body. Instead of giving up, he began simply taking breaks when he needed to catch his breath before joining back in with the video.

Soon enough, he started seeing changes in his body as he steadily built more strength and flexibility. This incredible video shows his progress as he started to be able to touch his toes and even slowly master Extended Hand-to-Big Toe pose—a challenging balance pose for any new yogi!

After fifteen months of daily yoga practice and a healthy diet, Jared lost a staggering 300lbs, as he chronicles in this inspiring video. Now he has a message for the rest of us: no matter how hopeless you feel, you can take back your life. And yoga is a powerful tool that can help you do exactly that.