How To Learn To Dance In The Rain 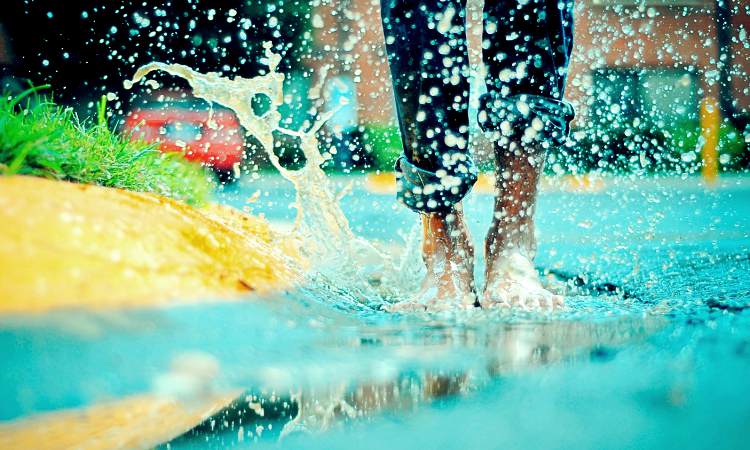 The gloomy clouds roll in. The mountain side is shaking with the sound of oncoming thunder.

Storms are different here. They’re not something you can shelter from, because they’re all encompassing as they envelop you in their rumbling embrace. There is nowhere to run. There is nowhere to hide. It feels like the world could be ending. If this was a movie, this is the moment when the cloudspart to reveal futuristic crafts that have travelled here from distance lands, flown by a cosmic crew.

The walk from my forest home to the retreat space where I work is short, but I find myself looking for something substantial enough to cover up. More than once, I have cloaked myself in blankets and bin bags and attempted to use the humble brolly, only to feel bogged down and damp.

This morning I gave up. Instead of trying to cover up,I took my clothes off, went outside and celebrated precipitation.

Our natural tendency is to seek out spaces where we can feel safe and dry, but when there is so much water falling from the sky, sometimes you just have to cast off your cardigan and go and dance in the rain. After all, we are waterproof. So…why not?!

For 8 months of the year, I watch this landscape shift and transform. In early spring, you cannot hear yourself think for the sound of rushing water as it spills down the mountain side and flows downstream. Yet, by mid-summer, it dries to barely a trickle. The spring meadows, once abundant and flourishing, turn to sun-parched desertscapes where skeleton fauna hang dead in the breezeless air.

By then the mountain is silent, the valley arid and still, days sticky.

When the sky first bursts in autumn, the landscape bursts into life. The earth is suddenly electrically charged. It reminds me that even though we often get fed up with rain and resist water, life goes where water flows. It is water that keeps things constantly shifting and changing, fuelling the grand cycle of time and our evolution. The shift in seasons simply acts as Mother Nature’s evidence that change is constant.

As humans we have always had a special relationship with water. It’s been celebrated and ritualised for millennia by ancient civilisations across the ages for its ability to regenerate and renew, cleanse and heal.

So next time you feel yourself getting in a huff under a downpour, here are some fascinating facts to help you embrace the element of water:

Lastly, water can be fluid and weak, but it can also wield incredible power. Out of all the bits mentioned above, this last one I hope we can all remember as one of the ways we can be like water. We all have our weak moments, but when nurtured and harnessed, we can be powerful enough so that instead of avoiding getting wet, we’ll have what it takes to dance in the rain.