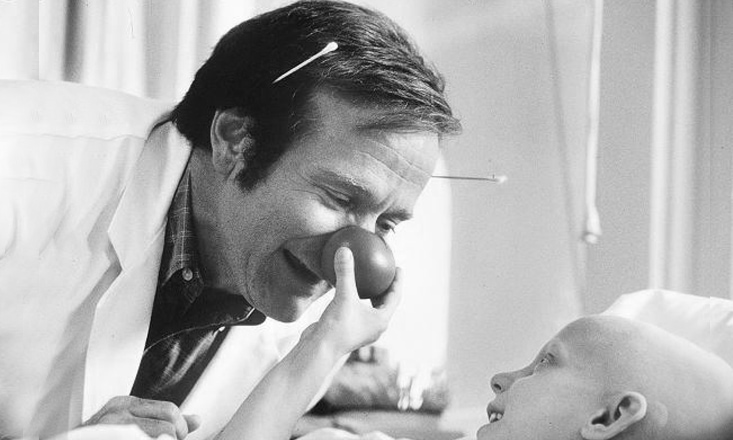 When we teach yoga in hospitals, it's important to be aware of the patient’s mood, as well as those of their relatives and the medical staff around.

The general admission process in a hospital, and the possible lengthy stay in it, is quite a dehumanizing process. You take off your own clothes and jewelry, and don a hospital gown. You have a name tag and a number, you eat bland food and you are being examined as an object would be.

This is why it is so important to shine your light there, inspire, compliment, share and imagine, support and encourage self expression and creativity, and breathe life into this dull place!

Hospital Yoga and the Universality of Play

Don’t come to teach yoga pitying your students, they have had enough of that. Your job is to bring some joy, fun and hope, uplift their spirits while you help their bodies (that have most likely been very sedentary) move and stretch.

A merry heart doeth good like a medicine, but a broken spirit drieth the bones. ~ Book of Proverbs, verse 17:22:

Since children from all cultures play, the universality of play suggests it is an essential human function, even when you are in a hospital. We use play to process situations and to express emotions we cannot express in words.

Along the years, I found a lot of inspiration for this from a few Clown Doctors I've met, so I would like to tell you more about this amazing profession and pick a few concepts and practices from them to merge with our yoga.

Clown Doctors and How They Work

Imagine being a child in hospital, away from the comfort of your home and all that is familiar, and feeling sad, anxious, frightened, lonely or in pain. This is where Clown Doctors can help.

They treat children in the hospital with medicine of a different kind…doses of fun and laughter!

Clown Doctors address the psychosocial needs of the child in the hospital in a unique way. By parodying the hospital routine, the Clown Doctors help children feel less traumatized by medical procedures. Oversized medical equipment, 'red-nose' transplants, 'cat' scans, humour checks and funny bone examinations are all part of the fun.

By exaggerating intimidating jargon and procedures, fear and anxiety are reduced.

'Clown Rounds' are conducted through all wards (including intensive care and oncology) and most clinics, including emergency and burns. Children can forget their illness for a moment and return to a world of fantasy and play.

The role of a clown and a physician are the same—it's to elevate the possible and to relieve suffering.
– Dr. Patch Adams

Hospitals worldwide are using trained medical clowns to distract, empower and relieve stress among pediatric patients and their families. Recent research suggests these "clowns at the service of medicine" reduce pediatric patients’ perceived pain and potentially children’s needs for anesthesia during pediatric examinations.

How effective is medical clowning?

Medical clowning has a growing base of evidence giving credibility to its effectiveness with both pediatric and adult patients. In addition, some physicians report anecdotally that having a medical clown participate in a child’s care helps everyone involved—from patients and parents to staff.

Clown Doctors use techniques such as magic, music, storytelling and other clowning skills to empower children with drama and fun, which help them deal with the range of emotions they may experience while in the hospital: fear, anxiety, loneliness and boredom.

The healing power of humor and laughter combat stress, reduce pain by releasing endorphins (the body's natural painkiller), boost the immune system by increasing the level of T cells and lowering serum cortisol levels, help promote a positive outlook, help people to cope with difficult situations and help to create bonds and therefore support between people — all of which aids the healing process.

One of the pioneers in the field is maverick physician “Patch” Adams, who found the treatment he received for depression to be both impersonal and ineffective. While attending medical school, he developed a bedside manner that was loving and gentle, and intended to amuse as well as heal his patients.

To promote his “love and fun” strategy, Dr. Adams dresses in clown outfits every day and has brought clowning to hospitals and other institutions around the world. He has always encouraged clowns to entertain adults as well as children, and advises doctors to incorporate humor into their sessions with patients.

Practice with various props. Farts are the only thing I’ve found to be universally funny in all countries. There are many little devices on the market, even a glorious remote-control farter. – Dr. “Patch” Adams

Clown Doctors de-stress the situation. They walk into a crowded clinic waiting room and have everyone giggling in a few seconds! Yes, seconds! Clowns call this an 'easy' audience. Why easy? Because patients know they need it. They want heart. You sprinkle imaginary giggle powder on their heads and they giggle.

Play and Humor From the Heart

A single clown walking down the hospital corridor is out of place and vulnerable. The clown's vulnerability mirrors that of the child, who is also out of place in the health care environment, and who must ultimately, despite the support of family and friends, cope with his or her illness alone. In this respect, the clown and the child become allies.

Children love the clown for a simpler reason. He expresses, loudly and eloquently, the bewilderment they feel when they find themselves in an adult world. – Hippisley Coxe

Both Shamanism and performing arts may be characterized as the conjuring of an immediately present reality of a different order, kind or quality, from that of reality itself. Shamanistic illusionism seeks to break the surface of reality to cause the appearance of a super-reality that is possibly more real than the ordinary.

Drama therapy and therapeutic clowning also coincide in the purpose for which this other reality is invoked or called for, namely healing, alleviating and promoting well being. The main mechanism employed in order to make this reality manifest is dramatic imagination.

Drama therapy thrives on imagination. In fact, a central therapeutic tool in drama therapy is the capacity to ‘download’ the world of imagination in the here and now in such a way that it is experienced as real.

Through the use of dramatic reality, drama therapists add a complementary dimension to everyday reality – one which makes the subjective inner realm and imagination real in the physical space, allowing it to be legitimized, explored, mastered and transformed.

As current research demonstrates, imagination is a powerful tool that can support both physical and emotional improvement, as well as promote therapeutic change.