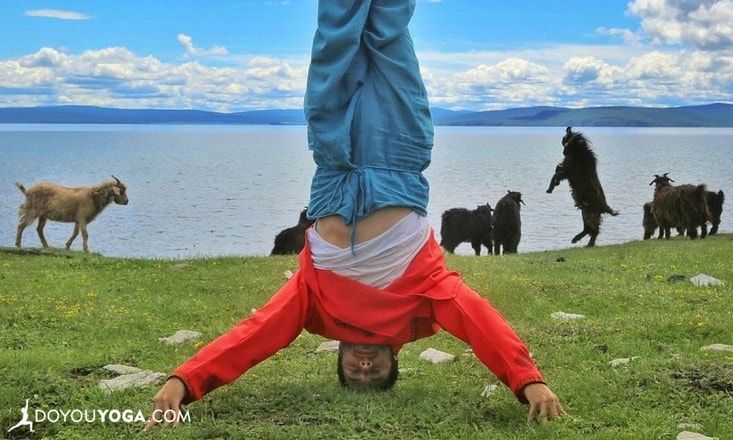 The global popularity of yoga has led to a variety of yoga trends. Goat yoga allows you to practice along with goats, beer yoga promotes having a pint during or after poses, and Buti yoga adds fast paced dance moves into classic asanas. Naked yoga, well, explores a practice with nothing on, and laughing/laughter yoga promotes finding the connection of a laugh to your yoga practice.

These are just a few examples of yoga trends that draw people in, or sometimes draw criticism. As weird, silly, or offensive that yoga trends may seem, we need them to explore what yoga means to us, and how it plays into a modern lifestyle.

What is Exactly is a “Trendy” Yoga Style?

Trendy yoga styles are new ideas and interpretations of a yoga practice. They are often attention-grabbing and they offer a different perspective or experience than a typical yoga class. Some trends are fleeting, capturing attention like a shiny object, while others tend to stick around and become part of the modern yoga landscape. Sometimes trends are criticized, and other times they are celebrated.

Trends in the Tradition

Although yoga is now considered to be mainstream, it took a long time to get there. It has roots dating back to at least 2,500 years in modern day India, and has always taken on different forms and interpretations.  We can’t say for sure what was trending thousands of years ago, but there were different styles, such as Hatha yoga and Raja yoga.

Yoga was introduced to the West in the late 19th century, and became a popular pastime of the New Age movement and celebrities. The practice became mainstream in the early 2000s, becoming trendy in wellness and fitness circles, and further expanding into yoga studios, gyms and community centers.

Yoga, once obscure and/or available mainly to the social elite, was now accessible to many people. As people began to learn, practice, and teach yoga themselves, new styles were created and introduced to the public.

Yoga is extremely adaptable, and trends help grab our attention. In this way, trendy yoga styles can introduce people to yoga and help yoga adapt to societies. An example of this adaptation is the eight-limbed path of yoga, first described in The Yoga Sutras of Patanjali.

Modern yoga focuses primarily on the third limb, or the physical yoga postures. Because of this focus, yoga is primarily marketed and represented by physical yoga poses. But this is just one interpretation—different schools of yoga and yoga styles direct students to different focus. Because people are able to adapt yoga to many situations, yoga trends will continue to pop up.

Yoga is a tool that you can adapt to your mental and physical needs. Sometimes, you may need a faster, sweaty practice, and other times, a slow, gentle flow. Both of these styles are good as long as it benefits you. If a trendy yoga style helps you expand your practice in some way, try it. New ideas help expand our limits, step out of our comfort zone, and learn something new.

This leads to a type of trial-and-error, finding some styles that work, and others that don’t. Either way, you explore new things, reflect on how they affect you and what you need, and create your own effective yoga practice to integrate into your daily life.

You ultimately define your yoga practice, not anyone else.

Our knowledge of yoga, science, and the body and mind is changing. Trendy yoga styles, in their many forms, embody this change. As we adapt yoga modern yoga lifestyles, trends will continue to test concepts of yoga and help focus where modern yoga is going in the future.