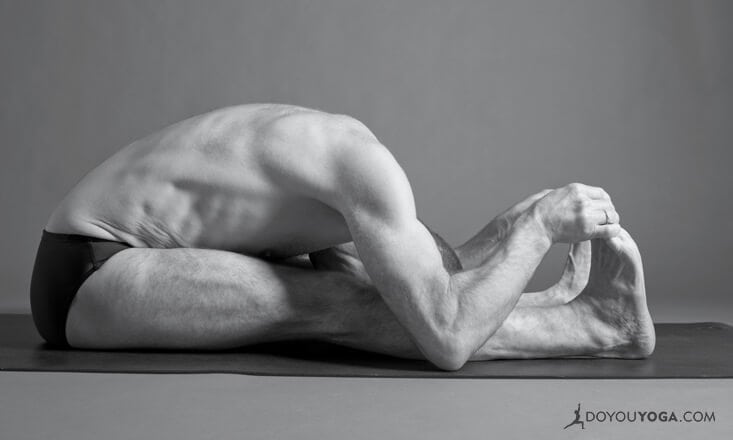 I remember my first yoga class. It was held in a small room at a local YMCA. The teacher was pretty buff. She looked like Xena the Warrior Princess, except with braided hair.

I was the only man there. I could barely reach past my knees in a Forward Fold. The teacher said to take deep inhales and slow exhales. That didn’t happen. I was too busy holding my breath.

Why? It was for my own good. I’m the clumsiest man on the planet. I walked face first into a stop sign once. Yeah… it’s bad.

I Hated My First Yoga Class

This might sound crazy, but I have a history of doing scary or unpleasant things when I believe they will benefit me in some way. I’m socially anxious. In high school, I signed up for a theater class in an attempt to “get over it.” It worked… kind of. Acting ridiculous in front of total strangers doesn’t bother me anymore (seriously, I’ve had to go onstage without wearing pants), yet the thought of giving a public speech terrifies me.

I believe in conscious evolution. That means accepting your flaws and doing something about them so you can become a better person. It took me months to tolerate yoga — years to love it — but I enjoyed the effect it had on my body, so I stuck with it.

Tree Pose used to be my arch-nemesis. I couldn’t stand on one foot for more than two or three seconds. Zen yoga teachers would say that’s a sign you need to “balance your chakras.” I’m too skeptical for that. I think it had more to do with my lazy childhood.

As a child, I consumed a diet that consisted of two major food groups: Taco Bell and Mountain Dew. My favorite hobbies were playing video games and watching Total Request Live with Carson Daly (I was one of the weird kids who listened to Korn).

Have you ever played Final Fantasy, Kingdom Hearts, or any Role Playing Game? If so, you know how video game characters get experience points (XP) when they beat the bad guys. I came to yoga with approximately zero balance, zero coordination, zero flexibility, and zero (insert every other aspect of fitness here).

Since then, I’ve boosted my XP. I can hold Tree Pose for minutes. I can reach my toes in a Forward Fold. I’ve not been attacked by any more stop signs. Yoga sucked at first, but I learned to love it — so much that I decided to become a registered yoga teacher last year.

Someone Can Always Relate

I’m sharing all of this stuff because I know how it feels to be afraid and nervous in your first yoga class (or several). Can you relate?

Someone always can. Doing anything new for the first time is frightening, but if you take the leap and sign up for that first yoga class, or theater class, or whatever it is that scares you, you might just feel better in the end. I've learned an awful lot from yoga, and now I want to share what I've learned.

Most importantly, yoga taught me to be present with what I am doing. I've taken to “Embracing Today” for a reason. You become unconscious when your mind and body are in two different places. This used to be a constant state for me. It led to regret, frustration, and unhappiness. Know the feeling?

Over the next few months, I’ll share my own successes and struggles when it comes to being mindful. Expect lots of stories, including how I came to really love yoga. Hopefully my stories will provide you with tips, inspiration, or at the very least, a good belly laugh. See you next time!

How did you feel about your first yoga class ever? Love, hate, indifference? Tell me in the comments below!