Common Chaos — My Journey Towards Peace 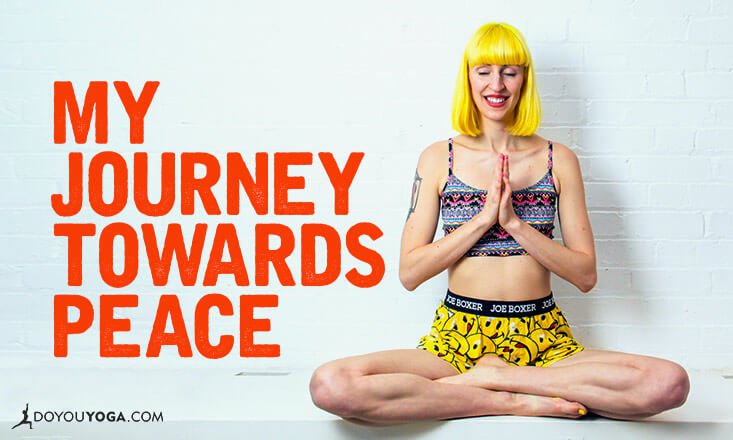 The first time I meditated, I was a ball of quiet rage. I wanted to strangle my very wise teacher, tip over all my cross-legged peers and then take a big metaphorical dump in the middle of the peaceful circle.

I’m not an inherently angry person but this quiet practice brought out the demon in me.

I remember telling someone close to me after the class about my experience. “Don’t meditate then, it’s probably not for you,” he’d suggested. I thought his response was sensible but I knew deep down that if I was having such a wild emotional response to something as innocent as sitting still, then I had some serious work to do.

So I started meditating.

Not every day, but sometimes. I counted the seconds in my head and would usually bail well before the timer sounded. I focused intently on the pains in my back and shoulders and couldn’t shake this feeling of being trapped inside myself.

Usually in life when something sucks, we stop doing it. I didn’t stop though because I trusted there was peace on the other side of this discomfort, or maybe if I was very lucky, peace inside of the challenge.

A lot of the time in my early attempts at meditation, I would cry. It’s not pretty but the truth is, I felt so intensely frustrated by the stillness. I had spent my entire life in motion. Being quiet, being alone — it was a totally foreign concept to me and I had no idea how to do it.

I wanted to be peaceful and I wasn’t.

I wanted it to be easy and it wasn’t. Feelings and memories that I had tucked away into the recesses of my bones started to surface. I just wanted to be shiny and peaceful and I felt like I was becoming more of a mess every time I sat.

I got tired of trying to be the way I thought I should be and started (mainly out of pure exhaustion) to just be the way I was. I learned to let the past move from the depths of my cells into a space where I could heal and release it. I learned to stop trying so hard.

I had to face my inner world.

The body stuff might seem like the biggest challenge, but that’s a ruse. The body is easy to blame as the enemy of meditation because it’s close to the surface — it’s tangible. Aches and pains are easy to see and label. What’s harder to grasp and understand is that most of us aren’t very good at being alone with ourselves, body or no body.

We don’t want to look within because when you’re new to meditation, the inner world is often a big chaotic mess. It’s like showing up at house you just discovered you own, only to find out that a hoarder has been squatting there and taking metaphorical and non-metaphorical dumps all over the place.

The hardest thing about meditation.

The hardest thing about meditation is actually just doing it. It’s getting rid of excuses, letting go of the should’s and could’s and simply sitting still, breathing in and breathing out.

Like with any skill, meditation has to be practiced. It’s so basic and simple that we expect to be good at it right away and are disheartened to find that it’s actually harder than learning an instrument or some complex math formula.

We’re so used to being distracted and occupied. From a young age, we learn to keep busy and this gesture of filling time with toys, activities, games and events, means that many of us absolutely suck at sitting still.

Thankfully, once we come to terms with the fact that sitting still is in fact a huge challenge, part of the challenge inherently and magically slips away.

The relationship you have with yourself is the foundation of this life. When you know yourself, you begin to know the universe. Peace must first be found within each of us and only then can we truly share and spread this joy and equanimity. Happiness, it’s an inside job.

There is nothing in the world that will give you a stronger sense of love, compassion and caring than what you can cultivate on your own from within.

These things aren’t tangible though, like buying new shoes or a fancy car. In a culture that praises commodities above all, it’s hard to justify carving out time for the simple act of generating peace from within.

So how do you do it? How do you choose to meditate when it flies in the face of “Western” or a commodity driven culture?

You make the choice that it’s worth it. You dedicate yourself to the task and then with reckless abandon and a deep personal conviction, you keep doing it even when it’s hard and seemingly fruitless.

At first, you might not see huge results. Like me, it might be more traumatic than peaceful from the get-go. Have faith, though. That’s all there is to it. Trust that the act of sitting still is one of the best things you’ll ever do for yourself.

Let the journey towards peace evolve at its own pace and as best as you can, breathe a little deeper and get out of your own way.