A Moment of Yogic Gratitude for Madonna’s Arms 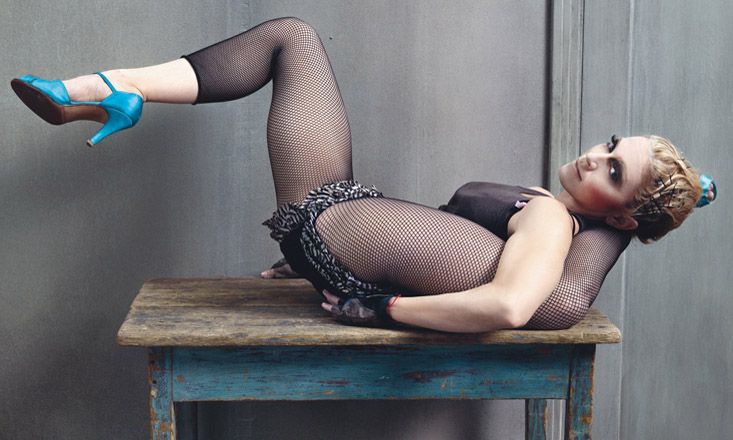 There once was a time when most Americans thought yoga was a brand of upscale yoghurt. Downward Dog was something you did privately in the bedroom, and Crow Pose was done while watching Alfred Hitchcock’s “The Birds.”

Yet, just 40 years later, yoga in America has become as ubiquitous as fast food. Yoga is no longer just for New Age scenesters in New York or the Bay Area. It has become a national phenomenon.

A Brief Timeline of Yoga in America

I live in rural New Hampshire and can’t throw a rock without hitting a yogi in teacher training (although all this aggressive rock throwing leaves me with both a lot of explaining and meditation to do).

In the past few decades, yoga has gone from a small, niche practice to a staggering $27 billion industry with 20 million practitioners. I’ve traced back the catalysts to a few key moments.

Of course there was the seminal journey of The Beatles to India in 1968 when they learned about Transcendental Meditation. In the 70s, an influx of studios opened because of gurus like Yogi Bhajan coming to the US to spread their message.

Then there is the fitness craze of the 80s, which put major emphasis on getting physical, physical, I wanna get physical… Yet I really think Madonna’s arms were the primary inspiration that tipped yoga into the mainstream.

How One Woman Began A Movement

Madonna is one of the most influential women in modern pop culture. Ever since she came on the scene, young women and girls not only worshipped her, but wanted to be her.

Her style was contagious, and in the prime of her celebrity, a legion of girls and young women pranced around with tulle skirts, lacy bustiers, gloves, rubber bracelets, leggings, and super teased, crunchy crimped hair.

She was iconic not just because of the art she created, but because she herself was an artistic canvas. Initially, her shock value and sexual provocations were the seductive qualities that tickled the attention of millions, yet after she established her place in the zeitgeist, her figure began a movement.

Madonna’s body became a cultural conversation piece, as she has always created trends rather than followed them. In a time when emaciated models touted the look of “heroine chic,” Madonna became the ultimate antidote with her strikingly strong, muscular arms.

Historically, super cut arms weren’t exactly perceived as feminine, and women avoided getting their upper bodies too toned. Then, Madonna, with her chiseled biceps and defined shoulders, created a new standard of sexy. Everyone wanted their body to look like Madonna’s.

In 1998, Madonna went on Oprah and announced that she was done with the gym and had become a convert to yoga. In the interview, Madonna spoke of the spiritual and mental benefits of her yoga practice and how it was a metaphor for life, but I think most people were obsessed with her physique.

And just like that, she sparked an uprising. Women who had never previously heard of yoga were suddenly interested in this magical training that would transform them into the unmistakable body of their hero.

The western yoga boom then began. Perhaps it was teetering on the tipping point already, but Madonna thrust yoga to the edge with her pelvis, and did the final push with her pointy bra. She became a brand ambassador for the practice.

I have immense gratitude for how Madonna’s arms embraced yoga. I believe those arms wrestled their way into the collective consciousness, and women started to value muscle over the waif figures of advertising. We wanted to be strong, and that, in and of itself was revolutionary.

This spark led to millions beginning their physical practice of yoga and, inevitably, the subsequent lifestyle changes we see today.

Infinite Appreciation for the Practice

The yoga community is still an evolving sect of humanity and of course is far from perfect. The business engine behind much of it begs questions about its authenticity. We are still finding our way to honor all eight limbs of yoga and not just the one that tones and tightens.

Ultimately, I think the growth of yoga is positive for humanity. These ancient lessons and wisdom serve the betterment of society. I have infinite appreciation for the practice of yoga in my life, and believe I have Madonna and her arms to thank for the introduction. I could hug her for that.