A Farewell to Bikram Yoga 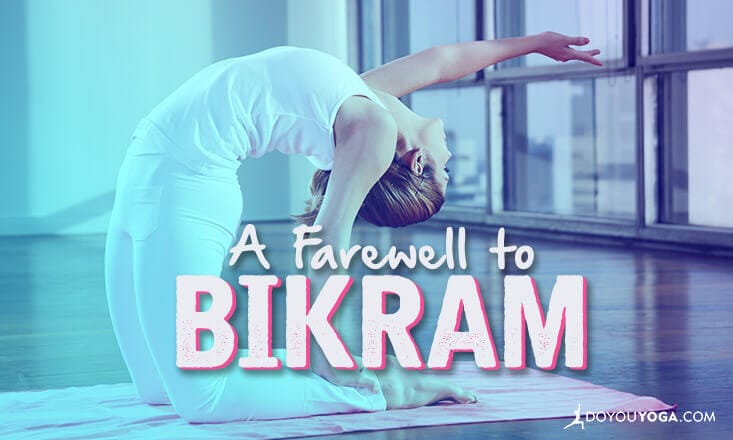 I love Bikram yoga. I know the bliss after a great session, the feeling of being completely cleansed by the effort and the sweat and the asanas, and I like the community of my local Bikram studio.

I was willing to overlook the smelly floors (and stinky clothes afterwards), the expense, the potential for injury (janu sirsasana and ustrasana in particular, or the series of backward and forward bending at the start of class), and the obvious vanity and ambition of some of the students – myself included.

The buzz outweighed everything else. And, I thought, injuries can happen anywhere – I listened to my own body rather than the teacher’s demands and enjoyed myself entirely. I knew it wasn’t compatible with my understanding of yoga ethics, but I ignored those doubts in favour of the strength and flexibility I was measurably achieving.

On Bikram and the Copyrights Issue

Bikram’s efforts to copyright his sequence were troubling; like the YogaGlo patent attempts, it drew justifiable disapproval from the rest of the yoga community.

The allegations of sexual harassment were even more disturbing, but he’s hardly the first guru to be accused of sexual misconduct (and certainly not the last). Until something is proven, it seemed unfair to let an accusation determine an outcome. But the last shred of doubt has now been eliminated: Bikram has been convicted.

His own public statements are desperately foolish, offensive (including “lots of students of mine, they commit suicide because I will not have sex with them”), and there is every chance that the serious allegations – including rape – may result in convictions as well.

Yet at my local studio, not to mention hundreds of others worldwide, the classes are as busy as ever – full of mostly female students, and the studios themselves largely owned and run by women: intelligent, educated, even feminist women. So what gives?

The Appeal of Bikram Yoga

For starters, Bikram yoga, even more than the Ashtanga series, has no variations and no interest in the age, shape or size of its students. And this may be part of its great appeal.

McDonald’s never made the best burger, but being able to obtain the same one from New Mexico to New Hampshire made them a household name. So, too, with Bikram – it’s comforting for travellers to know that whether they’re in Boston or Beijing they can attend a class that is familiar.

Let’s face it, change is scary for everyone, and this is a way to change your body without changing your mind. But most people aren’t travelling the globe, they’re going to the same studio every day, as with Mysore. And like Mysore, this constant repetition inevitably leads to a kind of progress that can be measured.

It can be difficult to answer whether one is happier or kinder, but you know if you can hold standing-head-to-knee pose longer than you did last month.

Bikram and Competing with Yourself

This kind of competitiveness with oneself – and others – is at the heart of Bikram. (Yoga competition? I thought that was a contradiction in terms. Looking at you, International Yoga Asana Championships.) Some of the teachers’ instructions include commands such as “push, push, push” and “lock the knee!” – anathema to other traditions who emphasise gentle patience.

I’ve heard Bikram teachers describe the practise as a 90-minute, eyes-open meditation, and maybe it can be that, but generally the emphasis is on going deeper, longer, harder, rather than stillness and connection.

This grasping, or at least, yearning for improvement, is explicitly warned against in the yamas (the original yogic ethics). Aparigraha – not reaching or grasping (what I call non-ambition) – is the opposite of the Bikram ethos.

And perhaps Bikram himself is in such hot water precisely because he skipped over this crucial and profound instruction, and its companions: restraints on sexual misconduct, not taking that which is not freely given, and not doing harm to others.

The Bikram story is a perfect illustration of how, in the West, we sometimes discard the moral foundations of yoga in order to meet a worldly goal.

And this ambition, not to say addiction, undermines the purpose of the practise.

Forcing the body to endure 90 minutes of intense physical activity in a room heated like a sauna has a masochistic joy that is seductive. And the buzz of the afterglow seems to outweigh any moral quandaries. This is yoga in its most Westernised, processed, consumerist form, with no connection to the 8-rung ladder of spiritual practise.

Practitioners can use the poses for their own ends while by-passing any moral issues – again, as in a McDonald's, consuming a product without examining its implications.

Separation Between the Man and the Practice

One studio owner explains: “I may not love Bikram but I love my students and the yoga. For me, the man and the yoga are completely separate.” This disconnect between the end user and the source is the same dynamic that allows people who love animals to eat (yes) burgers.

If we look only in the studio mirror, we can avoid seeing the suffering of anyone else in the room, never mind the planet.

Bikram teacher training costs money, and studio owners pay a franchise fee as well as royalty fees, technology fees and other costs. So while I may not condone the behaviour of the man himself, every time I show up for a class, I’m subsidising it. If I pretend otherwise, I’m condoning grasping (parigraha) in myself and Bikram – enabling him, one might say, in his predatory practises.

I believe there’s enough harm being done to women without my money and time contributing to the cause, so now, in spite of the pleasure and pain the practise has brought me, I say farewell to all that.

I send light to all those so deeply hurt by these events, including the man himself, and to all those still grappling with the inconvenient truth. But meanwhile, I’ll take a good look in the metaphorical mirror, and go back to the mat with my body, mind and heart.