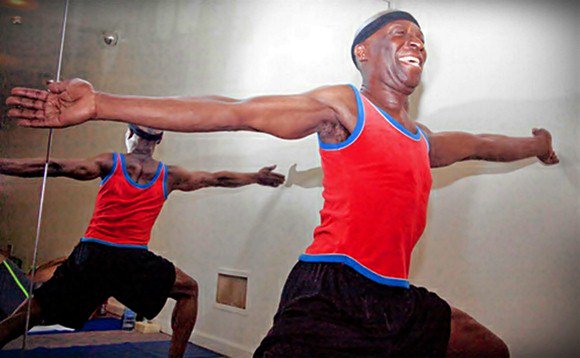 Remember Arthur Boorman, the war veteran who lost 140 pounds and regained his ability to walk with the help of yoga? His is one of those awe-inspiring (and tear-jerking) stories that show us just how yoga can transform people's life. Now hear the story of Solitair Macfoy, an amazingly dedicated 57-year-old man who successfully did Hot/Bikram yoga for one thousand consecutive days – all while nursing a fused knee caused by a motorcycle accident years ago.

Yes, that's One. Thousand. Consecutive. Days…and still counting. It's not just the fact that he's nearly 60 and still kicking ass at yoga (we have the 93-year-old yogi from NY, after all), but that he managed to do for a thousand straight days what some of us wouldn't even be able to do for a thousand seconds! And most notably, he accomplished this while suffering from an arthritic condition.

Havi Asch, Mr. Macfoy's instructor at Bikram Yoga Park Slope, said that Solitair "comes in with a certain level of pain — but it’s mind over matter with him." Asch also shared that Macfoy's energy in every class and his unwavering dedication have inspired other students and even their meditation masters.

In an interview with Brooklyn Paper, Macfoy said that doing yoga makes him feel good and has made him value life every day. He furthermore stated, "I’ve seen unspeakable levels of expansion in my psychology, my physical being, and spiritual side."

Macfoy believes it's the mental strength he's gained from doing yoga that helps him overcome soreness after sessions, and keeps him going back for more…day after day after day. He still walks with a cane, but has reportedly stopped taking medication and doing physical therapy for his knee ever since he started doing yoga. Now, he says, hot yoga is all he needs to cope with his condition physically, mentally, and spiritually.