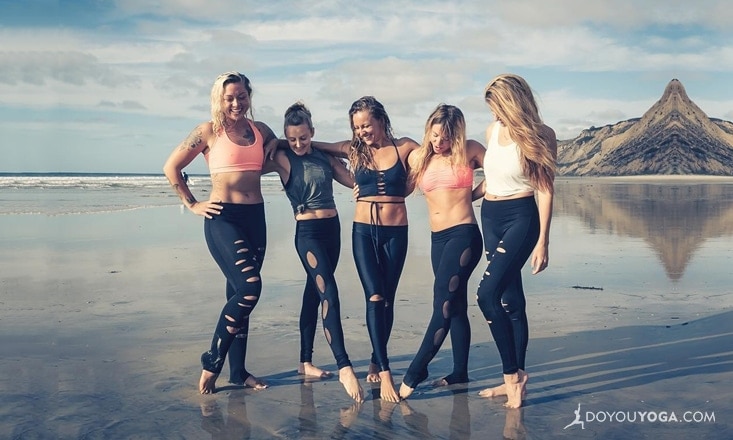 Gather your girlfriends and grab some popcorn, because we have compiled an amazing list of must-see movies that celebrate female friendships that will make you laugh, cry, and hold your girlfriends tight.

1. The Sisterhood of the Traveling Pants

Before these besties split up for summer break for the first time ever, they happen upon a pair of jeans that somehow makes all of their butts look good. In lieu of endless phone calls and letters, they decide to keep in touch with this magic pair of pants, which makes its way around the world as the friends send them back and forth all summer. From Greece, to Mexico, to South Carolina, and back to their Maryland hometown, these pants—and the girls—have some pretty incredible adventures. But the best part is when they’re reunited, because no international adventures can compare to the love of your best girlfriends.

You and your real-life besties might not share the same pants size like these girls do, but if you’ve got an amazing girlfriend crew, you’ll definitely be touched by these girls’ devotion to each other no matter how far apart their lives may take them.

Think this movie isn’t a celebration of female friendship? As if! Cher and Dionne are about as iconic as any female friendship can get. They are solid, even if Cher’s rationale for their friendship—the fact that they both know what it’s like to have people be jealous of them—is a little less so.

After discovering a love of doing so-called good deeds, valley-girl Cher decides to give the awkward new girl in school, Tai, an epic makeover. Little does she know, this makeover comes with consequences, as does all of her meddlings in other people’s love lives. When Cher gets in way over her head, she’s forced to re-evaluate her ultra-privileged life, learning what’s really important—like her girlfriends, for example.

Clueless may have been the peak girlfriends movie of the 90s, but Mean Girls surely steals title for the 2000s. The plot is almost the reverse of Clueless. New girl Cady Harrington allows herself to undergo a makeover by the Plastics, as her friend Janis calls them, in order to infiltrate their group and get revenge on queen bee Regina George.

This movie is hilarious, and incredibly quotable—chances are, you and your besties already tell each other to stop trying to make fetch happen (it’s not going to happen). But its message is timeless. As women, we need to build each other up, not tear each other down. Even if you’ve seen this one, Girlfriends Day is the perfect time to watch it again.

So far, all of these girlfriend movies have focused on teenagers. But let’s not forget that adult female friendships are amazing, too. First Wives Club follows a group of college besties who are brought back together by their friend Cynthia’s tragic suicide following her divorce. To honor their friend’s memory, Anne, Brenda, and Elise vow to get revenge on their own ex-husbands. Together they learn that while revenge is sweet, helping each other is way sweeter.

This movie has probably the best final scene of any movie anywhere. Seriously. Get ready to belt out this movie’s anthem “You Don’t Own Me” with your besties, because the First Wives Club’s rendition is totally epic and will definitely get stuck in your head.

Speaking of epic musical scenes performed by strong female characters, Pitch Perfect takes the cake. The Bella Bardens are a competitive university acapella group in need of new recruits after one of their leaders, Aubrey, puked on stage, causing the whole group to quit. Aubrey and her fellow leader Chloe end up recruiting a group of quirky girls that don’t look anything like the conventionally-pretty Bellas of the past. Among them is reluctant-recruit Beca Mitchell, an aspiring DJ whose mash-ups upset the Bellas’ normal way of doing things.

Friendships are born. Hearts are broken. Popular songs are sung acapella, giving you and your girlfriends the perfect opportunity for a sing-along. Make sure to tell your besties what Beca tells the Bellas in the end. “I love you awesome nerds!”

These ladies ain’t afraid of no ghosts. This reboot of the 1989 classic centers around the friendship between Abby and Erin, two besties who once co-authored a book about the existence of paranormal phenomena. Times have changed for them, however; at the start of the movie, Erin is desperate to have Abby remove the book from publication so it doesn’t hurt her chances at getting tenure at Columbia.

In exchange, Abby asks Erin to help her and her assistant, Jillian, investigate some ghostly happenings in New York. But the mission doesn’t really get off the ground until they team up with Patty, an MTA employee who knows New York like the back of her hand and just happens to have access to their iconic hearse, dubbed the Ecto-1.

The original Ghostbusters was great. But Ghostbusters plus a hilarious female cast and a story that celebrates female friendship? Well, that’s even better.

7. A League of Their Own

Most baseball movies cater to a male audience. But this isn’t most baseball movies. A League of Their Own is about an amazing group of ladies who are recruited to form an all-girl baseball league while America’s male players are away fighting in World War II. Though at first they’re treated like a joke, the ladies of the Rockford Peaches prove they’re the real deal as they get ready for their World Series game against their rivals, the Racine Belles. Sure, this movie is about baseball. But more than that, it’s about the bond these ladies form as they work toward their goals.

This film has an amazing cast, including Geena Davis, Rosie O’Donnell, Tom Hanks, and even Madonna! But the best part of this movie is the fact that it tells a fictionalized version of a true story. The Rockford Peaches were a real women’s baseball team who played from 1943 to 1954 in the All-American Girls Professional Baseball League. Pretty inspirational, huh?

Weddings can be stressful for everyone involved. But what’s even more stressful is watching your bestie cozy up to someone else, especially when that someone else is a grown-up mean girl who seems bent on freezing you out. This is what happens to Annie when her best friend Lillian gets engaged and asks her rich, beautiful friend Helen to be part of the bridal party. Annie finds herself competing with Helen for Lillian’s affection—a competition that lands the whole bridal party in some really crappy situations (pun definitely intended).

This movie does a great job capturing the insecurities and jealousies that can arise in female friendships. And the message, in the end, is a good one to keep in mind: there’s always room for another girlfriend.

No list of movies celebrating female friendship is complete without this iconic feminist film about two besties on the run. The trouble starts when Thelma and Louise stop for a drink on their way to a weekend getaway in the mountains. When Thelma is attacked by a handsome stranger, Louise intervenes, killing the attacker in Thelma’s defense. That’s when the two of them go on the run, heading Mexico one step ahead of the law. Their situation only gets worse from there, but no matter what trouble comes their way, they’ll stick it out together, until the bitter end.

With any luck, you and your best friend won’t ever have to go on the run from the law. But we’ve all got a friend we’d kill for—figuratively, anyway—and this movie will make you appreciate her even more. Friends till the end, baby!

This is obviously just a tiny fraction of all the amazing movies celebrating female friendship out there. Which is exactly how it should be. There’s no relationship quite as special as that between a girl and her girlfriends. So make sure to tell the ladies in your life how much you love them this August 1st and beyond!