7 Lessons My Dog Taught Me About Being A Better Yogi 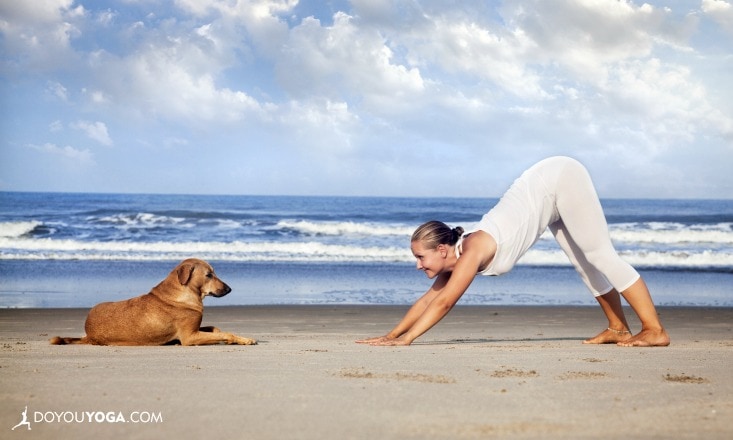 My buddy Bentley, my beloved standard poodle, died recently, leaving this yogi struggling to get her Ujjayi breath on in between wads of Kleenex. But I’m slowly coming around, and have taken comfort in reflecting on all that he taught me about being a better yogi.

I imagine he’s watching over me now from above, wiggling his tail with satisfaction each time I roll out the mat. I also imagine any yogi who has loved and lost a pet can relate. And for those who can’t, here are a few lessons from Bentley that just might encourage you to adopt your own living, breathing, down doggy at the nearest animal shelter:

Bentley was. All the time. Never brooding over the past, or freaking out over the future. He lived in the now. Whether it was challenging me to a game of tag (I never won), or taunting me during a session on my yoga mat (shimmying his long furry torso smack center on my mat before I could chill out in child’s pose), he found a way to have fun in every moment.

He knew when it was a tough day. Knew just when to offer up his pom pom crown chakra and fluffy ears to collect any forthcoming tears. Knew when to help others too – like when a family member with a disability needed help down the stairs. Bentley came to her aid before anyone else noticed, positioning his body in such way that no handrail or human arm was needed to safely guide her to level ground.

Bentley never hesitated to circle the forest’s edge – pursuing any squirrel dashing toward the nearest Douglas fir. Up the trunk he went, so sure he could climb. He rarely got past the lowest twig, and his landing was far from graceful, but he never stopped trying. He simply picked himself up, shook off the dirt and pine needles, and shot the squirrel a glance that said, “next time!”

He yawned and groaned along with the rest of us fumbling for our first cup of coffee or tea, but always managed to complete a round of salutations before being let out to do his business. Up dog, stretch the right hind paw, then the left. Down dog, a few tail gyrations, and down to child’s pose he went. I observed this every morning, and seldom found a worthy excuse not to join him.

Bentley didn’t allow trivial distractions to hijack his laser-eyed focus. He’d stalk a buzzing fly for hours before swallowing it. Stare me down at the table, daring me to refuse him a nibble of my Copper River salmon. Stop cold in his tracks to notice a bald eagle soaring above.

That dog, on more occasions than I can count, stopped me in my tracks too, pointing out some miraculous moment in nature I surely would have missed had he not been by my side.

6. Embrace Your Beautiful, Unique Self

To some, he may have looked like an egomaniac, prancing and one-upping any other dog that crossed his path. But to me, he simply relished in all his grandeur. No dog walked taller, barked deeper, or rocked a $100 a haircut poodle-do better than Bentley. He knew he was unique, and left a lasting impression on everyone who had the privilege of meeting him.

Bentley practiced santosha at all times. I tricked out his space with all sorts of dog bling – a velvet daybed, bones, rope toys, tennis balls, studded collar, even a Kong toy (which the Petco folks assured me would mesmerize him for hours) – to no avail. Bentley was happiest chasing his tail and sliding into svasana anywhere, as long as I was nearby.

So next time you feel your practice getting a little stagnant, pay closer attention to your four-legged friend. There’s no telling what you’ll learn.