6 Things I Learned After a Year of Consistent Yoga Practice 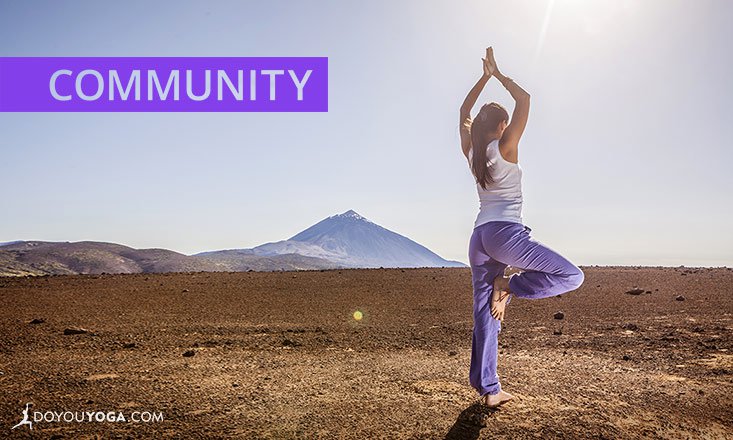 Well for starters, I never thought I would even use a Sanskrit word in any of my written work.

Even after a year of consistent practice, I still consider myself a yoga newbie. I attended my first yoga class sometime between 2007 and 2008 in one of those group fitness classes offered at my university gym. I didn’t really know much about yoga other than “it makes you more flexible and it’s relaxing.”

I can’t remember the details of the few classes I attended, but I remember the yoga classes being physically challenging and being “too slow.” I was relaxed after class, but I just didn’t feel any “different” or any more “blissful” than I was before I entered classes.

At that time, I guess I just didn’t feel very…inspired. I still attended classes throughout my undergrad years, but it was very sporadic.

Fast forward to my graduate school years, I still continued to attend yoga classes here and there at my new university. Then fall 2014 happened. I had a new challenging internship, my semester classes were heavy on research, I was diagnosed with type 2 diabetes at age 25, and I was just utterly confused by men, everyone, and everything around me.

I didn’t necessarily jump onto my mat once turmoil happened, but as the days turned into weeks and into months, I found myself gravitating to yoga more and more, even more than going to the gym.

Before I know it, I actually had (and still have!) a quantifiable number of times that I would practice asana in a week – 3 to 4 times a week to be specific, ranging from 15 to 60-minute sessions, some with meditation at the end.

It was no longer “oh I do it here and there when I have time.”

I used a combination of going to gym classes and online videos to keep my practice going. And through consistent practice, I learned and continue to learn more about yoga, meditation, and mindfulness. Not to mention, I am continuing to learn more about myself.

It’s been a complicated (and still confusing!) but beautiful inward journey, and I honestly love every second of it.

Here are just a few things that I learned in the very short year:

At least, not outwardly. I didn’t speak any softer than I already do. I still order normal lattes. Green juices are yummy but I don’t hit up the juice bar everyday. I didn’t go vegan. I still rage in traffic. I encourage my friends to do yoga, but I don’t yoga-speak to them.

You probably will not find me at Lululemon (but if they have freebies, I might be there). One of my sisters has recently been calling me a yogi, but you won’t find #yogi or #yogini in my Instagram pictures (which is really my own issue of disliking labels but that’s for another time to discuss).

Now, there is nothing wrong with any of those actions, it’s just I didn’t change just for the sake of what some people might think a yogi is. I don’t think I changed in that sense, but…

I have always considered myself as someone who is aware of their actions, but as my yoga practice and mindfulness increased, so has my self-awareness. I started to just observe (but not dwell) on my past actions for what they were, as well as evaluating the purpose of my current and future actions.

I’m becoming more attuned to my own feelings and how I relate to others without judgement. I reduced the negative views of myself and self-blame that I once had — whether it’s about my personality, physical body, or relationships, all the while continuing to improve all aspects of myself.

And when I do begin to have moments of judging others, I make it an effort to check inwardly as to where these judgments are coming from.

I have heard many of my friends and colleagues describe me as this calm and peaceful person. On the outside, perhaps. A year of consistent yoga practice has taught me otherwise.

I realized that there are actually many things that bother me, but then I started to realize that I’m just projecting my own insecurities, issues, or whatever else was going on inside of me.

It’s almost like I was forced to face some realities that I was previously in denial about, which has manifested itself in negative ways that did not necessarily involve me getting extremely angry. And also, it’s amazing how much I realized that I scrunch up my face and tense my body so much before going to sleep!

I have always prided myself in learning “on my own” and doing everything “on my own.” Don’t get me wrong, I do love my alone yoga time, and I give props to those who say they are self-taught yogis.

I knew that I needed a teacher but couldn’t (kinda still can’t) afford studio classes, so I just never bothered making the move to find one. But after attending a few free and donation-based classes and some yoga/meditation philosophy workshops, I realized how I can learn even more deeply with a teacher, and not to mention how much safer it would be if I practice asanas with a teacher.

5. I started re-cultivating my creativity.

Cultivating creativity – say that 10 times! The words “I’m not very creative” would often come out of my mouth whenever I see someone’s artwork or creations. I am nowhere near proclaiming that I’m the next Picasso, but I have recently started going back to doing what I had fun doing when I was a child.

In my case, this means arts and crafts, reading, writing, and just coloring (yay adult coloring books!). I also realized that “creativity” does not have to mean busting out a super masterpiece of a painting – it can be expressed in other ways such as cooking and baking, another activity I discovered that helped hone in on my creativity.

6. We shouldn’t get attached to our yoga practice.

Non-attachment. We hear it and read about it over and over again. It is another one of those things where I pride myself in doing already for as long as I can remember (which some people unfortunately confuse with non-emotion but that’s a whole another issue).

I realized this last lesson when I did a certain asana sequence three days in a row a few months ago. Each day was a different experience. I effortlessly melted down into Chaturanga like butter one day, but had one heck of a nightmare doing it the next day, out of breath and all.

The same goes when I’m meditating – my mind would be in total silence one day and it would be a chaotic nonsense the next day. This is exactly why even though we love our practice, we shouldn’t get obsessed about doing it right or “perfectly like that girl on Instagram.”

As time went on, I realized that, as cliche as it might sound, yoga really is a journey: a journey we should strive to embrace without judgement, competition, and attachment to its outcomes. I can’t wait to experience new and continuing lessons for the following years to come!