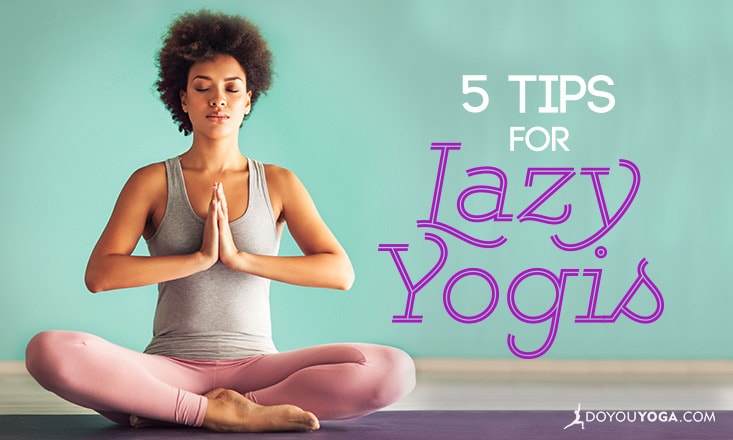 Yogis are known for their laid-back demeanor. All that meditation makes us more mellow, able to take life as it comes with a “C’est la vie” approach.

Whether we are go-getters in business and in life, or the type who need a good kick in the yoga pants to get on task, we all have those days where we need some motivation.

Here are 5 tips for lazy yogis:

Okay, so telling a lazy yogi to be zen like Buddha may seem counterproductive, am I right? Why would I tell you to slow down when you’re already chillin’ in Child’s Pose?

Because slow and steady wins the race. And even if you’re a lazy yogi, chances are good that you also get excited about things sometimes, and push full-steam ahead into projects and poses. But somewhere along the line, you lose your momentum. The excitement wanes when hard work sets in, and that’s when good yogis get lethargic.

So before you wear yourself out, take some time to warm up to your tasks, the way you do when you hop on the mat and prepare your body for a long sweat session. Endurance, baby. Set the pace and you’ll stay in the race!

There’s strength in numbers. Two lazy yogis get twice as much done… sometimes.

So your second tip for beating the lazy yogi blues is to find a buddy and inspire and motivate one another. Find someone with similar goals and a bit more drive than you have. Let that person kick your butt a bit, and keep you from Corpse-posing all day.

Lazy yogis are notorious for putting off unpleasant tasks. Which asanas make you agonize? The key to making those tough poses, or any hard work less daunting, is to find some aspect that is actually fun, or add some excitement whenever possible.

For example, create a home practice that mixes restorative poses with those that bring the burn. And when it comes to other chores, turn up the music and make it a party. Toss your fresh laundry on the bed, and roll in the soft warm fabric, inhaling the amazing scent of your soap, before you begin folding.

There are plenty of ways to make work more fun.

If you think too long and hard about anything, it will become burdensome. Say you want to start a cardio routine before your morning yoga. You’re plenty psyched the night before, so you set your alarm and slide into bed for a long yogi nap. But when the buzzing sounds and your limbs stay limp, that cardio session seems like a terrible idea.

That’s when you become a compulsive liar. You start telling yourself things like, “I’m just heading out for a quick jaunt, a walk to the mailbox perhaps, no more.”

When you reach your destination, you smooth talk yourself into heading farther down the road, to the end of the block. Then that block becomes a second, and a third, and before you realize how hard you’ve worked, you’re a mile into your cardio and glistening.

You really should get on your mat today. You know you’ll feel great once you’ve stretched and posed, but it’s so hard to get your lazy self in gear sometimes.

Some days you resent adulthood, because mom’s not coming to lure you from your bedroom, and force you to face the day. She won’t be laying out your clothing either, and making those kinds of decisions can be tricky in the wee morning hours, before the brown bean has done its job.

So what’s a lazy yogi to do? How about heading to the mat in your pajamas? Your paisley pants and Christmas cat sweatshirt are just fine for the home practice. A yogi is a yogi, lycra or not.

When the mood doesn’t strike, what do you do to inspire your yogic life? Leave a note in the comments!