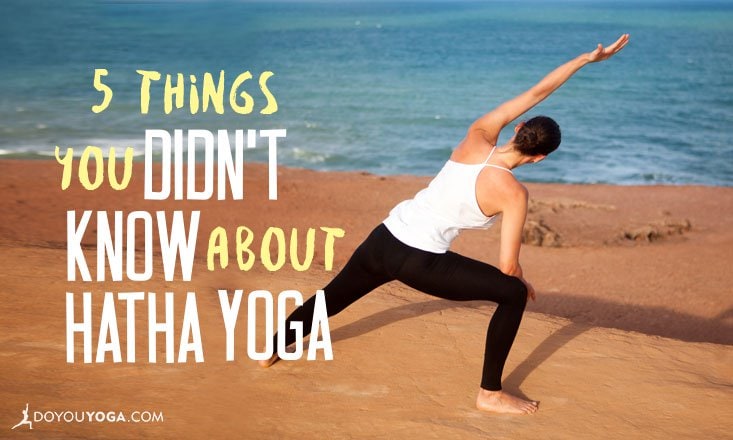 Hatha yoga is modern yoga as we know it. Every form of yoga that focuses on the physical practice, or asanas, falls under the umbrella of Hatha yoga. It centers on breathing, and requires students to maintain their breath while in sometimes challenging poses.

If you’ve been practicing Hatha Yoga for a while, you may be surprised by these little known facts about it.

1. We Have a Fish to Thank for Practicing Hatha Yoga

The first documented references to Hatha yoga were in 1100 AD. It is thought that the concept of Hatha was conceived by Shiva (a Hindu deity) while he sat on a lonely island. Later, assuming they were alone, Shiva explained his ideas to his wife, Parvati, but a fish overheard. The fish later became an enlightened being and saint named Matsyendranath, or “lord of the fishes,” the man credited as the founder of Hatha yoga.

As these ancient stories do, the one of Shiva and Matsyendranath has taken many forms over the years, but it no doubt provides us with a framework for the landscape of the early practice.

The sun and moon are common themes in yoga; you’re probably familiar with Sun Salutations and possibly Moon Salutations. The sun is thought to represent masculine energy, and the moon feminine. Therefore, as we practice Hatha yoga, we are balancing these two energies within ourselves.

You’ll need to achieve this balance both mentally and physically to reap all the benefits of a Hatha class.

3. All Physical Yoga is Hatha Yoga — But Your Studio May Say Otherwise

Yoga studios today like to come up with creative names for their classes. In reality, any class that pairs breath with movement is a Hatha class, be it Vinyasa, Ashtanga, or Power yoga.

This does not mean that it’s easier by any means. Holding poses for an extended period of time takes great strength and mental focus.

4. Getting into Difficult Poses is Not the Goal

Traditionally, the goal of practicing the yoga asanas was not to build muscle or perfect balance. The physical practice was always a means to ready the body for meditation.

Today, most casual yoga students have other goals in mind when they come to class. They want to de-stress, build strength, improve flexibility, and just relax. These are all wonderful reasons to come to yoga.

As students become more involved in the physical practice, they may be called to try their hand at a meditation practice as well, and find that that is where the real change starts to happen.

5. 20 Minutes a Day Can Sharpen Your Mind

There are countless pieces of evidence about the benefits of Hatha yoga for our bodies and minds. But perhaps the most attractive benefit for yoga sceptics is its capacity to improve brain function in just 20 minutes a day.

By slowing down, calming our thoughts, and getting oxygen flowing, yoga can help improve brain cognition, memory, and concentration. This could help get some get some unexpected students to show up in class like corporate CEOs and sports players.

Hatha Yoga is the science of using the body to prepare oneself for the ultimate possibility. ~Sadhguru

If you practice yoga, you most likely practice Hatha yoga in some form. While it’s shifted a great deal from its ancient roots, a Hatha yoga practice can have tremendous benefits for all students, regardless of its style.