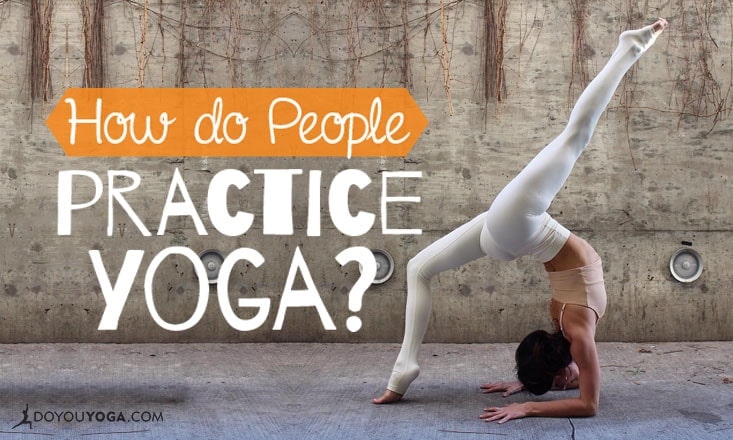 What comes to mind when you envision a typical yogi? Perhaps a kombucha-drinking, mala-wearing, crystal-meditating, chakra-aligning, wellness fiend? Yeah, we tend to think that yogis are predictable. However, after DOYOU surveyed over ten thousand people, we noticed some unexpected trends in the yoga community.

Overall, yogis aren’t everything we think they are and don’t fit into one all-encompassing box (although they’re probably flexible enough to). Read on below to learn surprising facts about how people practice yoga around the world.

Among those who practice yoga, survey data showed that twice as many males meditate daily than females. This interesting find could mean that yoga-practicing males are interested not just in the physical benefits of asana, but also in advancing their well-being—specifically their mindfulness and awareness, which, in the end, is a win for all sexes.

2. They Practice Because of a Specific Medical Issue

About one-third of our responders noted that they practice yoga because of a specific medical issue. The highest ranked issues included back pain, anxiety, and depression. The fact that so many people are practicing yoga to help their medical issues demonstrates evidence for yoga as a healthy holistic treatment or supplement.

3. Only a Few Have Experienced Yoga-Related Injuries

And to the point, 80% of practitioners haven’t had a yoga injury. That’s a lofty number considering that most of our sample has been practicing for at least 3 years.

4. Yogis Are Not Looking to Lose Weight

We polled people to find out which benefits of yoga are most important to them. Remarkably, people ranked ‘mind’ and ‘body’ benefits equally. ‘Weight loss’ happened to be the lowest ranking variable.

Despite what the fitness industry may try to market and sell, not everyone wants to lose weight. Encouraging body positivity instead, this new movement has swept the wellness community and has been backed by yoga for a long time.

A whopping 85% of yogis surveyed enjoy practicing yoga at home. Citing convenience as the single-most determining factor of a home practice, yogis also prefer the privacy and low cost. In addition, of those who practice at home, nearly 4 out of 5 yogis use YouTube for guided classes.

While not very surprising, but still exceptionally noteworthy— almost 4 out of 5 people surveyed practice meditation and more than 2 out of 5 are vegan/vegetarian all or some of the time. That’s pretty amazing!

Yogis represent all kinds of people and the image that people associate with yoga seems to be a bit distorted. It’s fascinating and refreshing to see that we yogis aren’t all the same. We practice for different reasons, at different places, and with different intentions.

Are you an unconventional yogi defying the preconceived notion of yoga? Let us know how in the comments below!