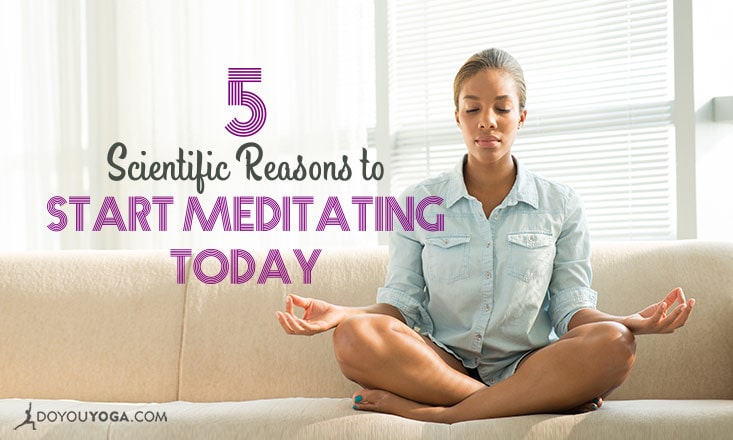 Science and religion. They are two great traditions born of two great world views. Throughout history, they have been at odds about the nature of our universe.

One claims that we can know the world through our intimate communion with a mystery that defies logic. The other sees the basis of reality in material terms. We can know a thing if we can touch it, taste it, feel it, see it, and verify it’s existence through testable explanations and predictions.

Convergence of Science and Religion

But these days, the divide between these two great streams of knowledge is shrinking. And on the topic of meditation in particular, they are converging. A quiet revolution is stirring as two perennial foes are seeing eye to eye. Modern science has joined the millennia-old faith traditions of the world to bring new light to an ancient practice.

In front of our eyes, the ineffable spiritual art and discipline of meditation has captured the attention of hard-nosed empiricists. And thank god for that! These days, we’re benefiting from a steady stream of scientific studies heralding the physical, emotional, psychological, and neurological benefits of meditation.

It’s kind of hard to miss because the media has taken a passionate interest in the topic. Many of these benefits have long been praised by mystics, martial artists, yogis, and self-help gurus, but now the scientific method is being applied to confirm their claims and even uncover new benefits.

In case you did miss the hype, here are 5 science-backed benefits of meditation that might motivate you to kick your practice of doing nothing into high gear. Also, you can now rest assured; you don’t need to choose sides. If you do start meditating, you won’t only have God on your side, you’ll have science too.

In a now famous study, researchers at the University of Washington measured how mindfulness meditation can improve your focus. The study examined the effects of meditation training on the multitasking behavior of knowledge workers.

The researchers found that, compared with the other two groups, only those trained in meditation stayed on tasks longer and made fewer task switches, as well as reporting less negative emotion after task performance.

2. Meditation Can Help You Think More Clearly Under Pressure

In one study, researchers found evidence that meditation can improve focus in high-stress situations. The study tested the impact of meditation on something called working memory capacity (WMC). Basically, WMC allows us to retain and manipulate information in our minds. We use WMC when we multitask and do math in our heads. Our WMC tends to decline in stressful situations.

As part of this study, US Marines were taught mindfulness meditation for 8 weeks in a high-stress environment — before deployment to Iraq. Would the marines who learned meditation maintain their WMC in the field? For the soldiers, their life might depend on it.

The study found that the marines who learned mindfulness meditation not only maintained but also improved their working memory capacity.

Translation? If you’re under pressure at work, meditation might help you more than you realized.

3. You Can Grow Your Grey Matter With Meditation

A study out of Mass General Hospital shows that meditation can change the structure of your brain, adding grey matter regions of your brain associated with memory, sense of self, empathy and stress. Researchers examined the brains of 16 meditators before and after they participated in an 8-week Mindfulness-Based Stress Reduction program.

Using MRIs, researchers found increased grey-matter density in the hippocampus, critical for learning and memory, and in brain regions associated with self-awareness, compassion and introspection. Participants who reported decreases in stress also showed decreased grey-matter density in the amygdala, which plays a major role in anxiety and stress.

Britta Hölzel, PhD, first author of the paper, said, "It is fascinating to see the brain’s plasticity and that, by practicing meditation, we can play an active role in changing the brain and can increase our well-being and quality of life.”

In a study out of UCSF, research led by Nobel Prize-winning scientist Elizabeth Blackburn showed that meditation can slow the aging process. In the last decade, researchers have explored how telomeres, the protective caps on the ends of our chromosomes, affect aging.

When our telomeres degrade, our cells lose their ability to grow and reproduce. This is thought to be a big part of the aging process. However, Blackburn won the Nobel Prize in 2009 for her discovery of Telomerase, an enzyme that repairs and lengthens our telomeres, reversing the effects of that aging process. In the UCSF study, scientists found that meditation, through reducing stress, caused an increase in the production of telomerase.

A new study from Stanford University found that practicing compassion meditation could be an effective way to reign in your wandering mind. Mind wandering, in the case of this study, is described as "the tendency for attention to drift to task-irrelevant thoughts.”

According to study co-author James Doty, researchers found that 9 weeks of formal compassion meditation training, "decreases the tendency for the mind to wander, while increasing caring behavior not only towards others but towards oneself."

So there you have it. Start meditating so you can sharpen your mind, think on your feet, grow your brain, live longer, and become a more caring human being. Sound good?