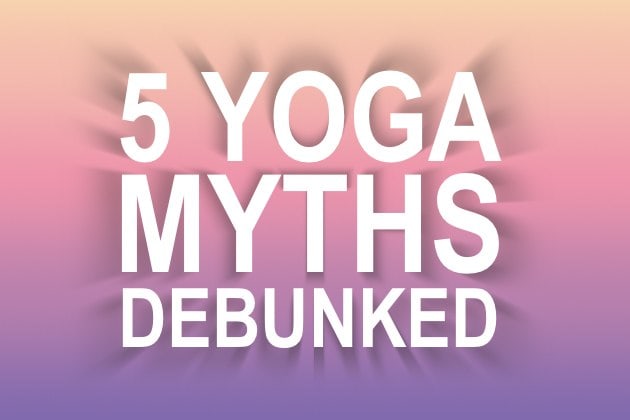 If I had a dollar for every time I've had someone say to me somewhat wistfully "I'd love to do yoga but I just…you know…CAN'T" and then they reel off some excuse, well, let’s just say I could probably afford to take that long-deserved holiday I've been needing.

Myth #1 – Only Skinny, Flexible People Can Do Yoga

This has got to be the most common reason I hear from people who love the THOUGHT of yoga but have never done it and feel like it’s not for them. Here’s a great fact: yoga makes you flexible. And it’s just practice that makes it easier.

Trust me, you will find yogis of all shapes, sizes and abilities in class. In fact, yoga is one of the best exercises to do for pregnant women and those recovering from illness and surgery. The thing about yoga is that it is all about finding your capabilities and working within your own limits.

In a yoga practice, the body is taken through a range of motion that it previously didn't know and works towards being more flexible and balanced. Your body will change day by day in its elasticity and a good yoga teacher will be able to demonstrate and encourage variations to accommodate this and everyone’s point in their journey.

Again, I usually invite anyone who tells me this to take a hot yoga class and THEN get back to me. Bikram kicks my ass. Vinyasa makes me sweat like nothing before. Even just focusing on my breathing for 10 minutes a day gets my day going in a different way.

There are many, many forms and types of yoga that range from simple meditation to a physical routine of asanas or postures. You can choose the level of challenge that you want – from a meditative Hatha style to a rigorous Vinyasa flow practice.

Most people tend to like a certain style, and for the level of challenge it gives them, but there are days when really it just doesn't work. The beauty of yoga is that it can be whatever you want and need it to be at that particular moment.

Myth #3 – Yoga Is Against My Religion And For Hippies

You’d be surprised at how many times I get told this. Repeat after me – yoga is NOT a religion. While it may seem that all green-smoothie-drinking, lycra-clad and constantly blissed-out people are all part of some sort of cult – nope, it just ain’t true.

Yoga often draws upon the teachings and philosophies of Hinduism and Buddhism because it originated in India, however it isn’t a religion. Yoga is an exercise of the mind, body and spirit and is whatever you want it to be – it serves your own needs – whether that is reflective meditation or simply a good workout. It asks you to have faith in yourself rather than in anything else.

As for the hippies – yes while most yogis profess to live in peace, love and freedom, yoga is for everyone from corporate, teachers, athletes, constructions workers and librarians. If you can breathe, then you can do yoga.

People who say this to me obviously have not been to my Bikram yoga class, because somewhat unsurprisingly, yes there were guys there! (And I hope not just there to perve on the lovely yoga instructor!).

While yoga seems to primarily draw in women, yoga is definitely not gender specific. There are many, many men who do yoga regularly – in fact most of the famous practitioners or instructors were/are all men! (Also think Matthew McConaughey – need I say more??)

If the guy in your life is struggling to understand why getting down on a mat is good for him – remind him that yoga also has much to offer men in the way of strengthening and toning muscles, relaxing and as a great stress reliever.

I always pause a bit when answering this one, because yes, yoga is hard in a way. But just not in the way that you’d think. A lot of people find yoga hard because it helps to open you up and clear your thoughts and vision and sometimes – well, people don’t like what they see. It’s easier not to acknowledge those feelings and continue on.

Yoga brings out the best and worst in you, but is ultimately a way in your life to show that it can be easier.