5 Factors That Could Help Get More Men On the Mat 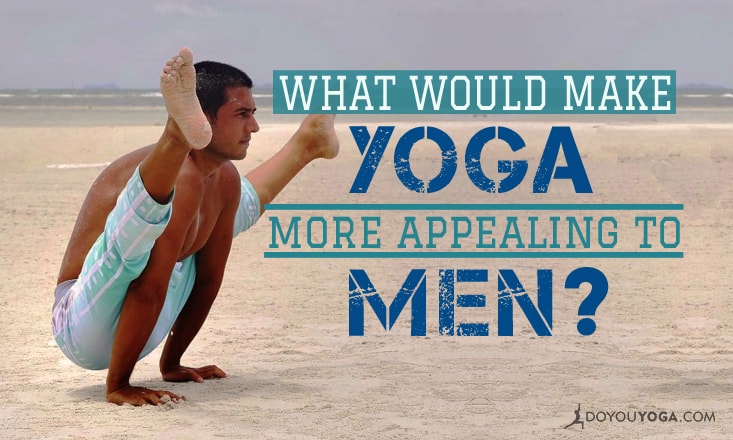 In 2016, DOYOU launched a Global Survey to find out and understand how yoga is being practiced around the world. With responses from over 10,000 people from 147 countries, the survey gave us a lot of interesting insights, including the fact that only 11% of regular yoga goers are men!

Maybe they see yoga as an ‘easy’ work out, or something only women do, reflecting a societally enforced lack of understanding about yoga’s healing, strengthening, and injury prevention aspects. This lack of gender balance is a vicious cycle, occurring because of, and leading to, harmful stereotypes about yoga culture, which narrows the reach of the practice.

So, to make sure yoga is reaching (and hopefully helping) as many people as it can, what are some ways we can get more men on the mat?

This is important for every demographic and in every area of life—we like to see people who look and behave like us doing a thing before we feel comfortable enough to do the thing, or even feel like doing it's a possibility for us!

If men see themselves represented in yoga outreach materials, advertisements, trainings, and classes, etc., they’re much more likely to attend a first class and to keep coming back after that first session. In the survey, 65% of male yogis are age 35 and older, representing a large gap in the younger male demographic—if we represent more diverse faces of yoga, it will make the practice more relatable and seem possible to more diverse people.

2. Talk About It With the Men in Your Life

Sometimes a yoga community can feel very insular and exclusive to anybody who tries to break in—this effect can be compounded for men if that practice space is predominantly female. I’m not saying that every man feels intimidated by a room full of women doing difficult, complicated bendy stuff—heck, shout out to the dudes who see that and think, ‘To hell with it, I’m going to try that!’

But sometimes, it can help if, in talking about our own yoga practice, we can present it as a welcoming space that is open to beginners and to those who may not fit the current mold of people who do practice yoga. Normalizing yoga practice and presenting it as suitable for anyone interested in strengthening his or her body is an important thing to keep in mind whenever we talk about our yoga practice.

One of the many interesting findings in the survey is that the percentage of male practicing yogis who meditate every day is more than double the number of women who do.

This could be due to many outside factors, but it does indicate that meditation is an important aspect of a yoga practice to men who do consistently come to the mat. So perhaps including more mindfulness and meditation in yoga classes and yoga practice in general will make it more appealing to more men.

The male survey respondents who do attend yoga classes tend to spend less money than women do (especially on props and clothes). Maintaining a low barrier to entry for yoga is important if we want to engage those who aren’t already a big chunk of the yoga demographic, especially when talking about making yoga more accessible to everyone.

I would argue that steering away from the materialism of yoga would be good for everyone practicing yoga, both currently and those with the potential to get involved—but keeping cost low could be an important factor to get more men to give yoga a shot.

5. Tone Down the Competition

A slightly higher percentage of men report yoga-induced injuries (23% of men, compared with 21% of women). This could be due to any number of factors, one of which could be that men typically participate in more competitive sports, and this mentality may be hard to leave behind completely even when they get to the yoga mat.

We, as instructors and fellow participants, can continue to perpetuate a culture of non-judgment and non-competition—and to espouse a mindset of listening to your body and not pushing it past its limits to ‘be the best’. This way, fewer people of all genders will experience injury and will be more likely to come to, and stay with, a yoga practice.

Diversifying the reach of yoga and making it an open and welcoming space to everyone is an essential task of anyone who loves yoga and believes that everyone can get something out of it.

Chat about it casually with the men in your life, and see if you can work to talk about your yoga experience to others in an open, inclusive, and non-judgmental way—you could make a big difference in someone’s health, happiness, and perceptions of the world.