4 Surprising Ways to Improve Your Digestion With Ayurveda and Yoga 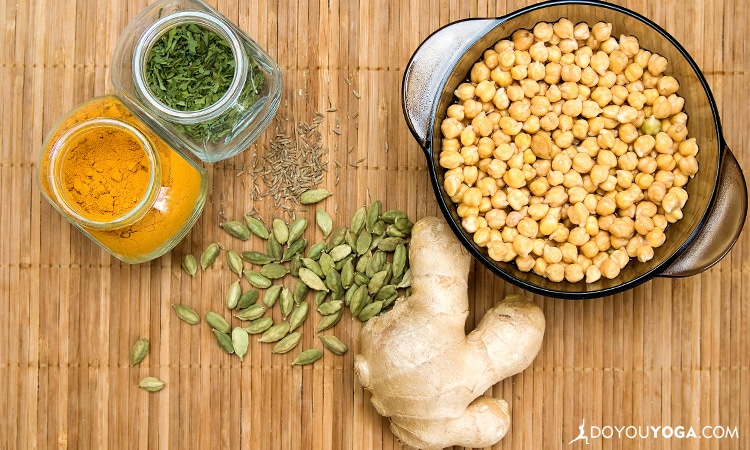 Do you feel heavy, bloated, and feel pain upon elimination? Do you have headaches and experience unexplained chest pain? Do you also feel tired often, yet have trouble sleeping and not know the reason? These are all signs that your elimination system could be compromised.

Unlike the popular elimination diets promoted by modern Western science and mainstream media, the ancient, 5,000-year-old Indian science of Ayurveda recommends certain health-increasing dietary and lifestyle practices that need not be discontinued after a specified time period.

And whereas in the West, we tend to think of digestion and elimination as being totally separate phenomena, Ayurveda sees both as deeply intertwined. When digestion is optimal, healthy elimination naturally follows. What benefits digestion also supports elimination.

Having struggled with various digestive challenges for most of my life until discovering Ayurveda and yoga in my early 20s, I am incredibly grateful for what I have learned. The Ayurveda and yoga lifestyle practices which I learned and now teach at my Ayurveda school have transformed my life, and I am therefore delighted to share.

One of the fundamental laws of nature taught by Ayurveda is that of the five great elements: ether, air, fire, water, and earth. These five elements combine to form bio-forces called doshas in the entire universe, as well as inside our bodies.

One of these doshas is called Vata dosha. It is comprised of the ether and air elements. The nature of air is to move, and Vata dosha is thus in charge of movement in the body.

The Rishis (sages) of ancient India, to whom Ayurveda is believed to have been revealed, have observed that Vata dosha is dominant in the atmosphere between 2-6am. The hours of 4-6am are believed by Rishis and Yogis of lore to be a spiritually charged time of day, in which it is most beneficial to meditate and perform other spiritual practices.

As the sister science of yoga, Ayurveda recommends waking up between 4-6am, for its spiritual impact, and because Vata dosha moves in a downward and outward action in the body during this time, which allows us to more easily eliminate. This can be observed by how birds, babies, and animals all naturally eliminate in the early morning hours.

I cannot fully express how much of a difference waking up earlier has made in my life, its benefits on my digestion and elimination, and the much more positive perspective it has given me.

There is a concept called Agni in Ayurveda, meaning "digestive fire." Ayurveda compares our digestive capacity to a physical fire. We 'extinguish' this fire when we consume cold water, whereas warm water kindles digestive fire, supporting elimination.

I remember how good it felt to drink warm water immediately upon starting to do so, and there has been no looking back since then.

So often touted as the classic 'healthy food,' salads actually disturb the elimination process for most people. That is because, like drinking cold water extinguishes digestive fire, eating cold, raw, uncooked vegetables in salads is difficult for our digestive system.

Eating raw vegetables additionally aggravates Vata dosha. When Vata dosha is aggravated for a long time, it can lead to the development of 80 different diseases. Keeping Vata dosha in a state of balance is a priority in Ayurveda.

The science of Ayurveda therefore recommends eating warm, oiled foods, which supports the digestive process and helps balance Vata dosha. You can steam or add oil to salads if you’d still like to eat them.

As a former pasta salad lover, I understand the challenge this tip may pose. In Ayurveda, one's digestive health is seen as a reflection of overall health, and the quality of health I now experience as a result of sticking with warm, oiled foods is so much better that I don’t miss my once beloved pasta salads at all now.

Come into a kneeling position and sit on your heels, with your palms on your knees. Sit in this position (called Vajrasana) for about 3-5 minutes after you finish your meals. This simple asana will help your food to digest in the most optimal way, preventing constipation, indigestion, hyperacidity, and other digestive challenges.

I have practiced Vajrasana after each of my meals for the past several years, and can see how my digestion have thanked me for it.

Try these Ayurveda and yoga tips today and your digestion will soon thank you, too.