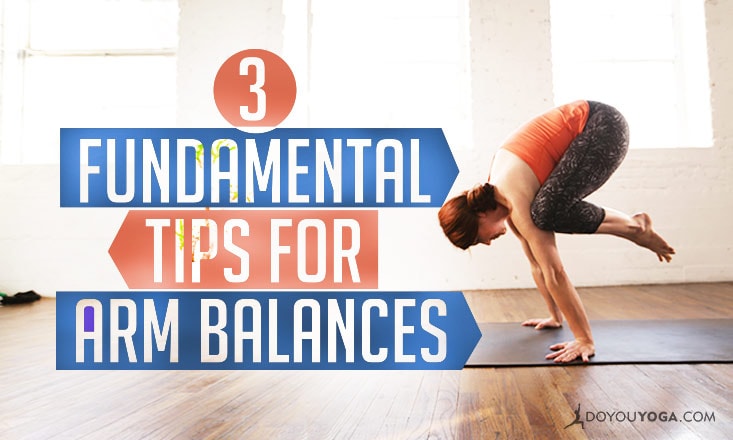 Arm balances can be some of the most seemingly complicated, difficult, and elusive poses out there, but they don't have to be!

There are some fairly simple points about anatomical structure and physical strength that you need to know about yourself and your body. Once you do, it will be far easier to get off the ground one day and you'll be able to pick which arm balances work for your personal structure — because not all arm balances are meant for every single body type.

Here are three fundamental tips for arm balances to keep in mind whenever you practice.

In order to defy gravity in an arm balance, you have to understand the concept of a pivot point.

If you think of a teeter-totter you'll begin to understand. If you were to sit on a teeter-totter alone, there would be no way that you'd ever get off the ground because there's no counter weight on the opposing side of the pivot point.

In an arm balance, your hands and wrists are the pivot point and you have to be able to get some of your body's mass on the finger tip side of that point. Some people have wrists with a lot of mobility to them and they can bend them way past 90 degrees, and some people have wrists that won't even bend to 90 degrees and they never will because of their skeletal structure.

If you have wrists that won't bend far enough, you'll have to bend your elbows — sometimes all the way to 90 degrees in your arm balances, but that can make them infinitely harder and oftentimes that still won't solve the issue.

One way to deal with this is to purchase a yoga wedge. It's like a slice of cake tipped on its side and you put the heel of your hand on the thicker edge and the rest of the hand cascades down to the skinner side. It's meant to make up for the degrees that are missing in the wrist's flexibility.

Believe me, if your wrists are an issue, this will be a magical tool.

2. Your Hip Decides a Lot

Everyone's hip is set up a little bit differently and with arm balances being poses that require a deep range in the forward fold realm, they can really challenge people.

I don't recommend stretching your ligaments and there's no store to exchange your skeleton at. That said, there is usually at least one arm balance (as long as your spine, wrists, and shoulders are healthy) that each student can find to play with. To be honest, once you've mastered one arm balance, the rest are just different mildly flavors of the same thing.

If you have hips that are comfortable in a yoga pose like Malasana or yogic squat, try Crow, Crane, or Lolasana. If your hip likes Baddha Konasana (Bound Angle/Cobbler Pose), try Bhujipidasana or Crow Pose. If your hip really likes Seated / Wide-Legged / Wide-Angle Seated Forward Bend, try Titibhasana (Firefly pose) and Vashistasana B.

If you keep in mind your own unique structure and strengths you'll be able to find one that works for you personally without as much risk of injury.

3. It's Not the Way Down to Chaturanga That Matters…It's the Way Up

Chaturanga is a very helpful pose for gaining the arm and shoulder strength that you need for arm balances.

The best way to do this is to get yourself into Plank and to acknowledge that you will not change your hip's positioning nor your spine's, and that you will only bend the elbows a few degrees at a time. You're thinking, just move the elbow and shoulder joints, everything else stays in position.

Then as you initiate the bend in your elbows, fight it. Fight it like you were trying to keep them straight. The more you bend, the harder it will be to get back up without wobbling through the hips, shoulders and spine. So stop at the point where you know you can get back up with steadiness and consistency throughout the rest of your body.

It's like the slowest bend in the world and the slowest straightening in the world, but isometric work like this is the best thing for creating the stability that you need in the arms and shoulders to keep yourself away from the ground in arm balances. Be patient and the strength you need will come!

Working on these concepts will help you get into the position that works for your structure and to gain the strength needed to keep yourself there as you take off in arm balances and fly.