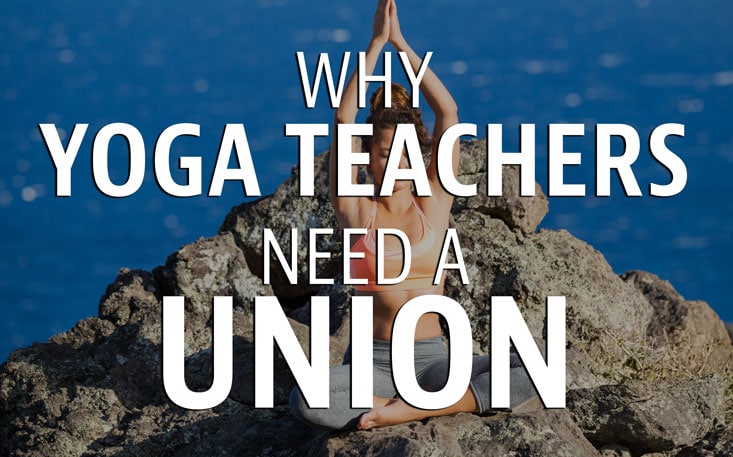 Unreasonable hiring practices and expectations are imposed upon yoga instructors in today’s industry: an instructor must have a perfect body, flawlessly transition into an arm balance from a handstand, prove their worth with thousands of IG followers, be vegan, “let everything go that isn’t serving them”, and be spiritual guides.

The pressure to perform and make a living as an instructor is causing damage to the yoga teacher community and their students, and the industry as a whole needs a union to protect the rights of instructors. Here are 10 reasons why yoga instructors need a union.

1. Yoga Instructors Are Being Forced to Work for Free

A highly common practice by studio owners is hosting specialty classes, charging students more for these classes, but requiring the instructor to teach that class for free. The other method is forcing instructors new to a studio to teach a set amount of free classes to see if their style fits with the studio’s paying students.

These business practices are justified by demanding the teacher practice seva (a community service penance paid for profiting from yoga) or as a favor to the instructor by the studio in exchange for their exposure to the studio’s clientele.

The practice of requiring instructors to teach for free is illegal, but instructors are unable to defend themselves for fear gaining a reputation of not being a proper "giving yogi," or by threat of losing their job in an oversaturated market to someone willing to teach for free.

Teacher trainings were once a selective process, requiring interviews, safety and competency tests, and were only taught by highly experienced instructors. Now, trainings are a product offered to anyone willing to pay, often by under-experienced educators looking for profit.

This leaves seasoned instructors, with decades of experience, forced into lower earning power, losing their jobs to new instructors that lack the safety and knowledge needed to guide new students through a physical exercise, but are willing to accept less pay. Studios will threaten to hire new instructors eager to teach any class if talented instructors won’t accept meager earnings.

3. Instructors are Not Their Social Media

Prior to hiring, studios will research an instructor’s social media presence and following. If an instructor does not have thousands of followers, they will not get an interview. This forces instructors to spend their time and money to heavily market themselves on social media in order to receive a class or two at meager pay.

4. Instructors are not Handstands

Social media has created the expectation that true yogis must handstand, arm balance, and defy gravity to lead a good class. Only those with an exceptional personal practice get hired. The majority of students who have taken a yoga class can tell you that personal practice does not always equate to an ability to lead.

In fact, it often leads to a dangerous class in which beginners are thrown into headstands and arm balances, physically injuring the students and discouraging the students from ever coming back.

Instructors need a chance to build relationships with studio clientele, as well as earn income outside of their meager class profits. An hourly waged job working the desk of a studio could allow the instructor the face time needed with the clientele, while also closing their income gap.

Studio owners however, practice bartering through free work trade, in which they don’t pay desk and custodial staff for their time, but give them free classes instead. The majority of these barter trades are not properly being reported to the IRS and are unfair to all parties involved.

As a result, instructors are losing the opportunity to gain extra income. Additionally, many studios pay the instructor a flat fee and a per head bonus for classes taught. The instructors are forced to teach classes to the work trade staff, without receiving their additional pay for the students.

6. The Yoga Instructors’ Pay Percentage of Classes Is Too Low

A studio will charge $15 on the lower end of the scale. Twenty students will attend a class. That’s a $300 total income for the class. The instructor will be paid on average $30 as a flat rate for a class. Instructors that are able to negotiate an additional per head rate usually only receive an additional dollar. At best, the instructor would see $50 of the $300 dollars, a meager 16% of the class’ income.

The one to one and a half hours you spend with your instructor only accounts for a third or less of the time that instructor actually works for that small pay. Instructors often have to teach at three or more studios to make ends meet, adding hours of travel time to their schedules.

Hours a day are allotted to marketing themselves. Instructors show up early to every class they teach, and stay after to meet you and answer your questions, and a good instructor will spend an hour creating the perfect playlist and new sequence for each class.

8. It’s Expensive to Be an Instructor

A certification costs anywhere from 3,000- 15,000 dollars. It costs thousands a year to maintain that certification. This doesn’t include the money spent each year in insurance, the costs of being registered through yoga alliances, the cost of maintaining CPR certifications, the travel to and from studios, and the money spent on self-advertisement.

Finally, most instructors are misclassified as independent contractors, forcing them into paying higher taxes and receiving fewer benefits than if they were employees.

9. Yoga Instructors Get Injured and Sick

A lot of yoga instructors live paycheck to paycheck, struggling to maintain enough classes at enough studios with enough students to pay their bills and earn a living wage. If an instructor gets injured or sick for any length of time, they are forced to not teach their classes, losing either the inadequate class pay, or if the instructor is injured for too long, losing their classes all together.

Instructors are desperate to become a brand ambassador to gain followers and credibility as an instructor. Becoming a brand ambassador is unregulated territory, where yogis often receive free clothing in exchange for zero pay for the hours of their time it takes to advertise a brand on social media.

Unions protect workers from unfair labor practices, assuring the rights of skilled workers. Yoga instructors are taken advantage of every day by studios and the yoga industry. If yoga is going to continue to be a favored American hobby, then instructors need to be protected and regulated in order to assure fair labor standards as well as the safety of students.