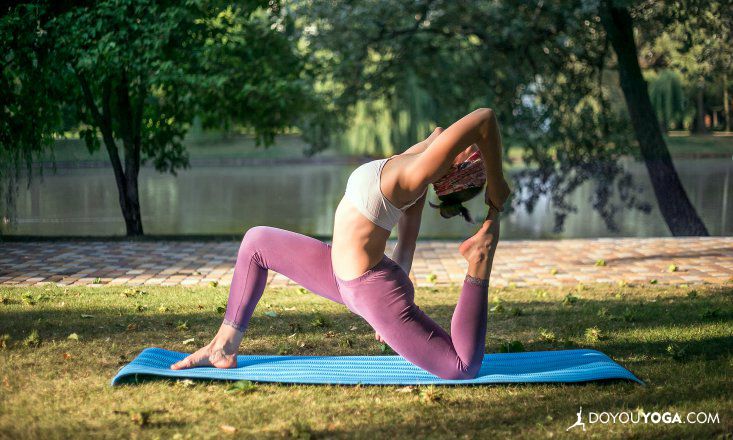 “Do you feel different?” a classmate asks as we roll up our yoga mats on the last day of the 30-day yoga challenge and stow the studio’s blocks, blankets, and bolsters on the shelves.

“I’m not sure yet,” I say, uncertain about how I feel. As an ardent Type-A (a characteristic I’m trying to modify with yoga), I completed 36 classes in the 30 days, doubling up some days to “bank” classes in case I needed to miss a day.

Although I practice most days in some way on my own, it was hard to make time to get to the studio every single day. I fought traffic and my resentment toward it. I pushed through poses I had no business being in, and then through the need to be in those poses. But on balance, I was more in balance for the experience.

The studio, Yoga for Everybody, had presented this challenge before, but I only looked longingly at the flyers announcing the event and enviously at the participants and their names on the sticker-laden wall chart marking their progress.

It was never the right time. Is it ever the right time, though? There was always an excuse, but this particular slice of time seemed perfect. My mother had died, my house was on the market, and my oldest would soon graduate from college.

Thirty days of yoga might be just the recipe to turn this swirling batter of emotion into a piece of cake. I felt about the challenge as I do about baking: I fret and worry, making a mess, much more proficiently than I organize, mix, and manage to turn life’s ingredients into pretty frosted cupcakes.

I signed up on the spot, before I had time to think.

I am no stranger to yoga.

I have a 15-year practice, and have been a certified teacher for two years. It has been my salvation and my medication. When I practiced yoga, I managed to yell at my children an hour later in the day than usual. It grounds, centers, and calms me. It stretches and opens my mind and body.

But getting to the studio every day? Chakra-balancing or not, that is an entirely different kind of stretch. I was not sure how I would find the time in the day or the strength in my body, but the gauntlet was down; and I was up for it.

“Do you feel different?” I thought. Yes and no. Just as Yin and Yang dance in a delicate balance in life, the good and bad aspects of this challenge sang in harmony, too. That was lesson number one. Here are a few other things that the 30 days taught me:

“Do you feel different?” she asked. “Yes,” I said. “And no.” I feel kneaded and baked; sweet and in need of icing. I need to focus on some of the things I’ve let slip during this month. But I will approach everything with different eyes now, because I rediscovered that little quiet place deep inside all of us that makes us both unique and inextricably links us on a molecular level.

So yes, I feel different. But, also, I feel very much the same.