Why “OMing” Is Awesome

I remember the first time I was in a yoga class and the teacher invited us to chant OM with her. I shifted uncomfortably from one sitz bone to the other, took an inhale to prepare with the rest of the class, and then…I just sat there. I all but rolled my third eye as the teacher led the class through a series of three OMs. So this was the hippy-dippy kind of yoga that I had heard about -and frankly- was a little afraid of. You see, up to that point I had only practiced yoga at the gym, and thought it was a nice workout to complement my cardio routine.

First Off: You Have To Accept The OM

For the next few classes that I had with this teacher, I continued to opt out of any of the chanting stuff. I thought it was weird, I have a terrible singing voice, and I didn’t want to think I was “that” kind of yogi. But then, something inexplicable happened: I tried it. I don’t know what came over me that day, but I did it once, and I was hooked. Sure, I felt a little silly that first time, but from then on it became one of my favorite parts of class. I couldn’t explain it, but doing it just made me feel good inside. Fast forward a few years to my yoga teacher training program, where I learned a bit more about OMing as a mantra, and what makes it so special.

What Does "OM" Mean Anyways?

What looks like just a little two letter word that sounds like “home” in English, actually contains three separate sounds with three separate meanings and sounds. A more accurate written rendition would be more like “aum.” The first sound is “ahhhh,” and taps into our conscious state of being, and of wakefulness. The second sound, “ohhh,” connects to our subconscious state, where we can tap into dreams. The third sound, “mmmm,” invokes the unconscious mind, a place of deep sleep and where no thoughts or desires exist.

When we chant the three syllables together, we connect the separate states of being, moving from the physical body, to the subtle body, and finally to the energetic body. There is a final part of this mantra, and that’s the silence that follows immediately after you finish. That split second of silence where you hold your breath out and before you inhale and begin your next OM, is known as Turiya; a state of being which is neither here nor there, but is a complete absence of energy as you transition from one state to the next. It is the highest of these states of being, and so each OM is a journey from the lowest form all the way to the highest, and then back again. 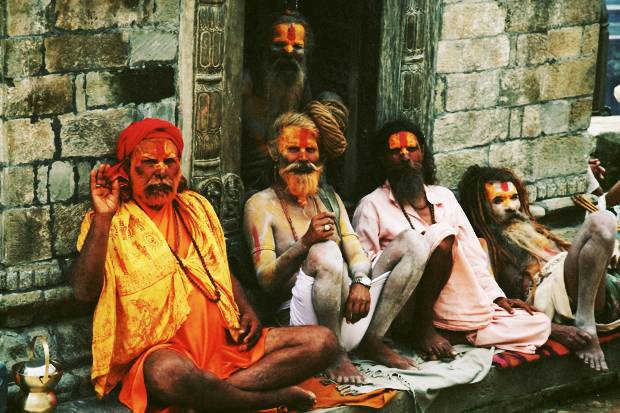 The next time an OM-portunity arises, take it!

When we make these physical tones, we actually have an effect on the physical body as the vibration moves from one area to another. The first sound, “ah,” originates in the solar plexus area, right where your ribs part. The vibration can be felt in the spinal cord, where it then moves to the “oh” sound, which comes from the heart and throat areas. The vibrations here connect to the the thyroid and parathyroid gland, helping to stimulate and keep your hormonal function healthy. Lastly, the “mmmmm” sound can be felt throughout your whole head, stimulating your brain and sinuses. All three tones together create vibrations which awaken your whole upper torso, from the stomach all the way to the crown of your head, helping them to run smoothly as they unite in vibration.

In our increasingly impersonal world, where we’re more likely to send an email or text than to pick up the phone, chanting together is a way to connect with other people and really feel a sense of humanity. When you start your first OM with others, at first all you can hear is your own individual voice. But as the OM goes on, you will undoubtedly realize that you can no longer hear your own voice anymore. All you can hear is the collective voice, all of the individual energies coming together in one communal vibration that you can fill coming from within you, but also at you from all directions. This is my favorite part of OMing, and what kept me coming back for more after that first experience where I actually tried it.

There is something truly special about experiencing a group of people as a community, and really shows that we’re much more powerful when we do things together rather than individually. Oh, and that Turiya at the end of the OM? It is especially powerful when the whole room goes silent after a group OM. That first inhale after you finish and take yourself back to a state of wakefulness is one of my favorite feelings in the whole world.

If you’ve been sitting in class, trying to avoid eye contact with the teacher whenever chant time comes around, do me a favor: the next time an OM-portunity arises, take it! I promise, you won’t be able to get enough after that first one. And from then on, OM like you mean it, from your solar plexus, all the way to your crown, and out your mouth for the whole universe to embrace and absorb.