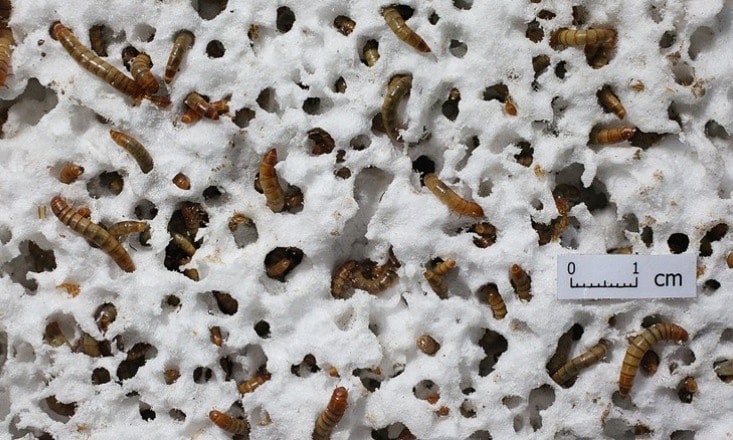 Mealworms aren’t just for feeding your fish anymore. A recent study has found that mealworms are able to digest non-degradable plastic, and that the waste they produce is biodegradable.

These tiny worms could now be the solution to our plastic waste problem.

The study, conducted at Stanford University by engineer Wei-Min Wu, Professor Jun Yang, and his doctorate student Yu Yang (both of Beihang University) found that certain microorganisms in the mealworm’s gut are able to digest Styrofoam and other forms of plastic.

The worms are able to survive on this plastic diet, and not just survive, but are as healthy as they would be on a normal diet of bran.

Researchers found that it is due to the microorganisms in the mealworm’s gut that is able to digest the plastic. After digestion, the plastic becomes carbon dioxide (which would’ve been produced no matter the diet), worm biomass, and biodegradable waste. The biodegradable waste seems perfectly safe to be used on plants and crops.

After Wu, Yang, and Yang fed some worms antibiotics before feeding them plastic, the waste produced was not biodegradable. So it is completely up to the bacteria in their system to produce the degradable waste.

In an interview with CNN, Wu said, “The findings are revolutionary. This is one of the biggest breakthroughs in environmental science in the past 10 years.”

If we are able to understand the workings of the mealworm’s gut, this could lead to new ways to reduce plastic waste, especially as the US produces 33 million tons of plastic each year, with only 10 percent being recycled.

As great as this discovery is, it’s not a replacement for recycling, Wu says. He told CNN, “We need to be better at recycling. We shouldn’t waste plastic anywhere.”

We’re inclined to agree. Imagine what could happen with this discovery if we combined it with better recycling practices.

Think about that the next time you see the container of mealworms in the pet store.