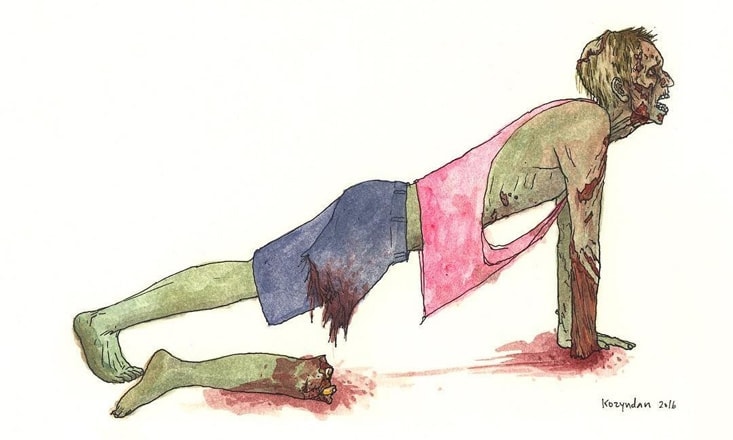 When we say that yoga is for everyone, we usually mean everyone alive. But now that we’ve seen the art series titled The Grateful Walking Dead by husband and wife artist duo Kozyndan, we’re convinced that yoga is just as important for the undead.

If you’re a fan of The Walking Dead, or just concerned about the zombie apocalypse in general, you have to check out these awesome drawings of zombies doing yoga.

The Grateful Walking Dead series was inspired by Kozyndan’s love of both yoga and The Walking Dead. Although they've been working on these illustrations on and off for several years, they finally shared them with the world this past October as a part of Instagram’s #InkTober challenge.

There’s even an homage to the Grateful Dead’s own Jerry Garcia (see below).

The series definitely contains a dark sense of humor—just check out the zombie in Mountain pose donning a “Keep Calm and Carry On” t-shirt! But if you look beneath the surface, there’s actually a pretty deep yogic sensibility to these gory drawings.

As Kozyndan wrote on their blog about the series, “Given that the sequence of asana is in a way a cycle of life and dead, its [!sic!] a bit fitting, albeit grotesque, to show the undead deep in endless practice.”

In their blog post, Kozyndan went on to say, “We're are [!sic!] not too sure how common this love of both yoga AND the Walking Dead is, though. Are we the only ones out there???” But given the hundreds of views this series has received on Instagram, we can say for certain that the world is full of zombie/yoga fans.

You can check out the rest of the series—as well as Kozyndan’s other amazing pieces—on their Instagram page, or even get your own zombie yogi painting on their website. Share this with your zombie and yoga-loving friends!