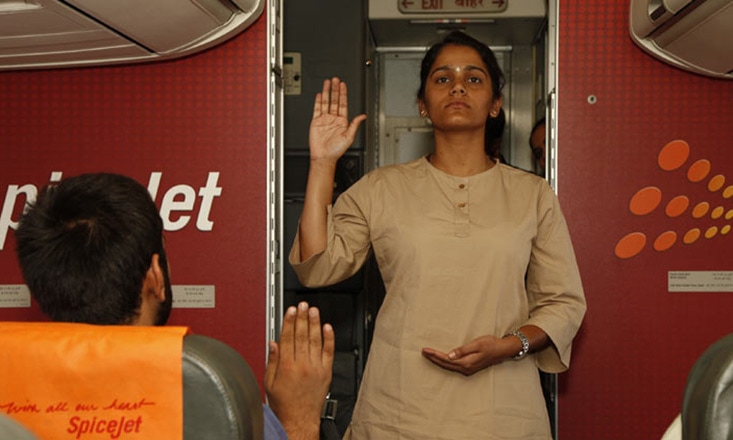 This new venture was called “High-on-yoga@35,000 feet,” reports the Times of India. The airline offered the classes on select flights on June 21, encouraging passengers to do yoga along with specially trained members of the cabin crew and 50 instructors from the Isha Foundation.

The airline stated that its 10-minute Upa yoga routine was specifically designed to be done in flight. Upa, according to the Times, is a simple but powerful style of yoga that incorporates pranayamas and activates the muscles, joints, and energy system. Passengers were encouraged to join in while seated. The program was specifically designed for Boeing flights exceeding 1.5 hours, says the Times.

Ajay Jasra, general manager of communications and corporate affairs at the airline, told the International Business Times that because of the lack of space and movement during flights, passengers often complain of “physical distress,” and the airline was trying to help relieve some of this stress.

Passengers apparently gave the event a thumbs-up; the IBT reports that many passengers said they felt more relaxed and experienced relief from the typical flight complaints like feeling heavy or having blocked ears.

Setting the Standards in On-Flight Yoga

“SpiceJet is pleased to be the first airline in the world to demonstrate yoga on board,” said Ajay Singh, chairman and managing director of SpiceJet, adding that the airline is happy to be associated with Prime Minister Narendra Modi’s initiative to promote yoga.

Yoga is clearly taking off in the aviation world; various airports around the world, including Chicago’s O’Hare and London’s Heathrow, are now offering yoga lounges and studios to weary travelers who need to relax, meditate, and even squeeze in a quick yoga session before their flight. However, in-flight yoga has yet to hit the skies…until now.

Could this be the newest airline-related yoga trend? It might at SpiceJet; the airline told the IBT that it plans to hold more in-flight classes during monsoon season, when flights are less crowded and there is more room for instructors.

What do you think? Would you like airlines to start offering on-board yoga classes?