Love Yoga AND Black Metal? This Class Is For You 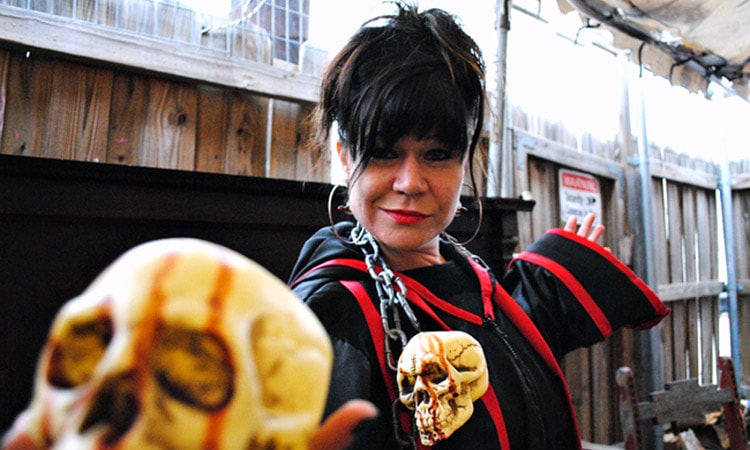 She knew her community of dark arts aficionados, hardcore roller derby chicks, horror and gore movie buffs, and tattoo artists, could greatly benefit from the focus on the mind, body, and breath found in yoga, yet many of these folks shy away from the visibly “hippie” vibe surrounding the yoga scene.

To fight this stereotype, Patton created a “Black Yoga” class at Eastside Yoga in Austin, Texas. Instead of greeting her students with peaceful music and a positive-thinking mantra, she welcomes her attendees dressed in Satanic-style robes in a room full of skulls and flickering candles.

It’s not just Patton’s décor that sets her yoga class apart. She also changes up the soundtrack to fit her student’s tastes—which means leading the class to music by black, drone, and doom metal artists like Cradle of Filth or Pallbearer, for example.

Though it may seem like these changes completely alter the experience of yoga, Patton explains that, behind the skulls and the tunes, it’s still the same yoga you would practice in a room full of lotus flowers and Buddha statues.

Patton’s efforts to introduce yoga to this demographic have been met with incredible enthusiasm. In her first class alone, she attracted more than 50 students—so many that Eastside Yoga owner Steven Ross dubbed her a “yoga legend.”

Her class has become so popular that it even attracted bass player Gary Mader of the New Orleans black metal band EyeHateGod.

“I meditate, but I don’t know anything about yoga at all,” Mader explained. Yet the concept of this class resonates deeply with him, as it has with many in Austin’s alternative community.

The town’s overwhelmingly enthusiastic response to Black Yoga matched what Patton had been hoping for exactly.

“That’s the one thing that draws me into yoga—the community aspect of it,” she said. Patton has clearly succeeded in bringing the joys of yoga to a whole new crowd, proving that yoga is for everyone—no matter what type of music you listen to!

What do you think? Would you try a Black Yoga class? How else can instructors broaden the appeal of yoga?