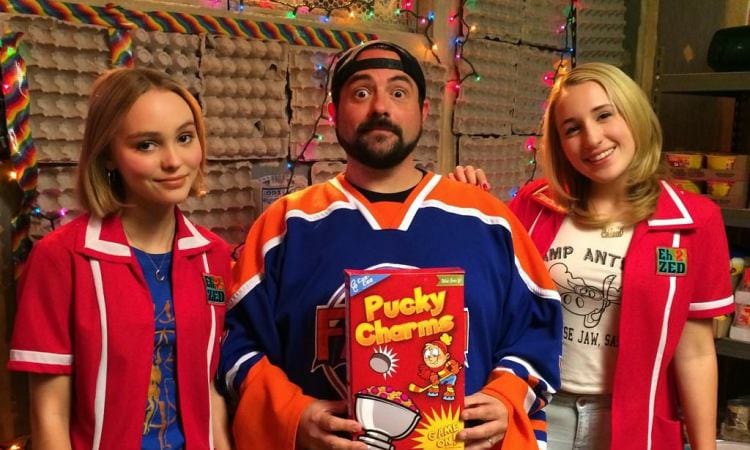 In what may be the very first yoga superhero movie, Kevin Smith is set to direct his daughter, Harley Quinn Smith, and Lily-Rose Depp, daughter of Johnny Depp, in a new action film about convenience store clerks who battle evil with yoga.

The plot, which I swear I am not making up, is as follows, according to YogaDork: 15-year-old yoga enthusiasts Colleen Collette (Depp) and Colleen McKenzie (Smith) work at after-school jobs as store clerks in Manitoba, Canada. One day, their placid existence is threatened by an “ancient evil” that rises from beneath Canada’s frozen ground and threatens their attendance at a high school party.

The girls must therefore team up with a man-hunter played by Johnny Depp in order to vanquish this evil with their kick-ass yoga skills, using “all seven chakras, one Warrior pose at a time.” Say whaaat?

Kevin Smith, known for his 1994 debut Clerks (and its 2006 sequel, Clerks II), clearly has a pedigree in movies about convenience store clerks, but it remains to be seen how he will handle the mashup of yoga and comic book/action aesthetics. It will be interesting to see how the film will combine the non-violence of yoga with the realm of ass-kicking superheroes and the existential angst of working in a convenience store.

“The timing couldn’t be more perfect, as so many production companies are struggling to find content to fill a serious void in the market of female superheroes and antiheroes. And it’s pretty exciting to have their dads making the film with them,” StarStream CEO Kim Leadford told the Hollywood Reporter.

This leaves us with one burning question: What yoga moves would you use if you had to defeat an ancient Canadian evil?