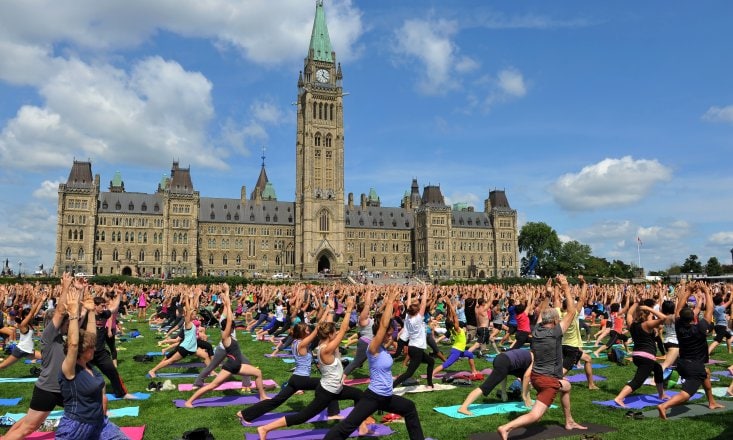 The very first International Yoga Day, to be held on June 21, is already attracting a lot of attention—and a lot of yogis are making some big plans.

India’s planned celebrations include a gigantic yoga class and a world record attempt. Representatives from the Guinness Book of World Records will be on hand as the government of India attempts to break two records at once: largest yoga class and people from the most nationalities in one yoga lesson.

Participants will gather near the India Gate in New Delhi for a 35-minute routine, which, according to the Guardian, may involve up to 45,000 people. The class will be broadcast in more than 100 countries around the world, according to the Washington Post.

According to the Indian Express, the current record for largest yoga class is 29,973 people. Jamie Clarke, press officer for Guinness World Records Limited, told the Times that this record is presently held by students from 362 schools led by Vivekanand Kendra at Jiwaji University in Gwalior, India on November 19, 2005.

June 21 in the US and Around the World

Meanwhile, in the U.S., events will be held pretty much everywhere. New York’s Times Square will host the United Nations celebration of International Yoga Day, which will include the Solstice in Times Square.

In Washington, DC, the Friends of Yoga and the Embassy of India will host yoga talks, demonstrations, classes, dances, and musical performances at the National Mall, while the First Post reports that over 100 U.S. cities will organize a yogathon to celebrate the day.

Numerous countries and cities around the world are hosting yoga events of their own. Vienna, Austria, will have a yoga session in Sigmund Freud Park, hosted by Yoga Mystery School; London will play host to the Om Yoga Show at Alexandra Palace; and according to the Economic Times, India plans to organize a “mega” event in Madrid with the cooperation of the Spanish government and 12 yoga schools.

The Indian mission in Madrid will offer a yoga master class at the Plaza de Colón, in addition to a yoga conference at the Buena Vista Cultural Center. In the opposite hemisphere, Australia is planning World Yoga Day celebrations at its famous Bondi Beach which will include yoga classes, meditation, cultural activities, and panel discussions.

All in all, it appears that June 21 will see an almost innumerable amount of yoga-related events taking place to celebrate International Yoga Day. Here’s hoping that it’s a good one!

What are your plans for the first-ever International Yoga Day?