How Chaos (And Kittens) Helped Me Find Contentment 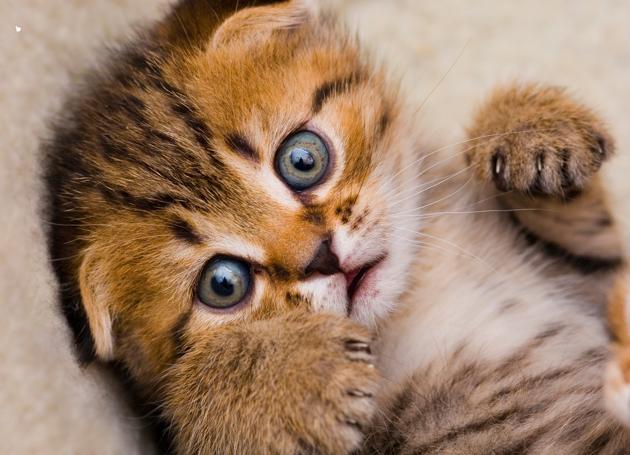 My favorite thing to do at the end of a long day used to be to come home, throw on some comfy clothes, and just relax. Even if I had assignments to catch up on or other obligations that needed my attention, I still loved to bask in these first few moments of silence upon getting home. There was nothing that happened during the day that a nice cup of coffee and a blanket couldn’t fix.

And then came a little monster. Two of them, actually. Two little monsters in the form of tiny orange foster kittens dubbed “Franklin” and “Bash” (legal drama nerd alert, I know). When Joseph and I welcomed Franklin and Bash into our home, I was overwhelmed by their never ending energy, their abilities to climb the curtains in the living room, the shower curtain in the bathroom, and miraculously appear dangerously close to the stove whenever I started to cook. When I managed to get one out of danger’s way, I would turn around just in time to grab the other one. A dynamic duo, these two came crashing into my relaxing home life, scratching and attempting to eat everything in their paths. My coffee was replaced by drinks with lids to ensure no one pounced across the table only to scald himself with French vanilla. My laptop keyboard became the most popular seat in the house and my morning yoga practice became the perfect time for Franklin and Bash to swat at my ponytail and place themselves directly under my feet.

However within a few days, Bash’s energy was noticeably down. While I had noticed an occasional adorable sneeze before, he was now so congested that he was having trouble breathing. Both kittens had watery eyes, runny noises, and very little appetite. I remember sitting on the floor with Franklin in my lap, while Joseph attempted to bottle feed Bash, who simply refused to take in any food. While these tiny little creatures had wreaked havoc on my peaceful apartment, I suddenly found myself in tears, terrified that their little bodies couldn’t handle whatever was going on. Trips to the vet resulted in numerous medications for the boys (if you and your significant other can team up and give a cat a pill, you can get through just about anything) and I worried that they wouldn’t recover.

Thankfully, after about a week, things started to look up. Both kittens were eating on their own and their energy levels were on the rise. Within the next few days, they were back to their old selves, running around the apartment, leaving claw marks and little specs of orange fur just about everywhere.

Having not been able to get to my favorite studio in weeks, I jumped at the chance to head to a Saturday morning class as soon as the boys were better. At the end of our practice, one of my favorite instructors sent us away with a quote by Albert Einstein: “Our task must be to free ourselves by widening our circle of compassion to embrace all living creatures and the whole of nature and its beauty.” As I took in this statement, I acknowledged what all of our friends and family already knew – there was nothing “temporary” about these two little “foster” creatures who had taken up residence with us. While Franklin and Bash have been an unexpected addition to my life, they have also altered my definition of peace and contentment, and have shown me an entirely different beauty in life – chaos. Certainly, there is something wonderful about basking in silence; about enjoying just being still. But we don’t live our lives in silence and we shouldn’t. Contentment can be experienced in so many ways – from that feeling you experience at the end of your yoga practice as you roll up your mat and prepare for the rest of your day, to laughter so great it makes you topple over, to the sense of comfort you feel over a holiday meal with your family. For me, contentment is no longer just about relaxing and enjoying alone time at the end of the day. Contentment is about recognizing and appreciating the beauty in the world around me – in my friends, my family, the beautiful city I live in, and now, these two crazy-eyed little rascals that greet me at the door whenever I come home and can’t wait to fight over a spot in my lap when I sit down to start doing work.

I’m thankful for my yoga practice, for without it I might go crazy. But mostly I’m thankful that my practice has taught me that change doesn’t have to be a scary thing. In yoga, change equates to growth; to moving along in our journeys and taking on new challenges. New challenges present themselves to us all the time, and it’s up to us to either bask in the chaos and to find out what we’re capable of, or to hide away from the change, and ultimately, the growth.

“Foster” kittens, no more, Franklin and Bash have taken up a permanent residence in our homes and in our hearts. And even when they’re using my yoga mat as a scratching post, or darting into the laundry room and behind the washing machine the very moment I open the door, they make me smile, they make me laugh, and they’ve helped me grow to appreciate all that’s around me – even when it’s complete chaos. Because total chaos makes those moments where you’re able to take a minute and just breathe that much better.