Daredevil Yoga: Man Does Yoga on a Speeding Motorcycle (With Video)

Proving that even the calm, controlled practice of yoga can have its daredevil side, 40-year-old GugulotuLachiram of India spends his free time going down local roads while performing death-defying yoga on a speeding motorcycle.

“I saw people performing dangerous stunts on national television,” Lachiram says in an interview with Barcroft Media. “I thought if they can do it, why can’t I?” 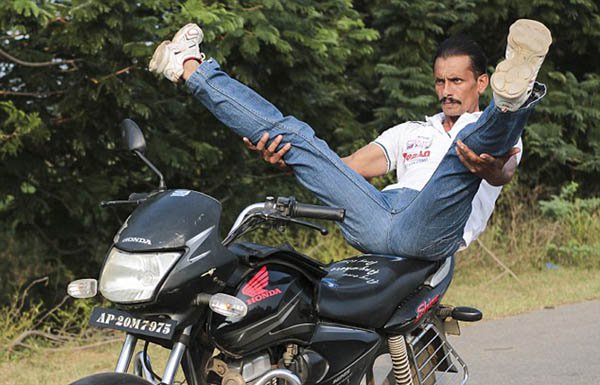 Lachiram spends two hours a day doing yoga on his bike. He can perform a variety of precarious poses while hitting speeds of up to 60 kph (40 mph), maintaining these speeds for up tothree miles while twisting into sitting, standing, and prone positions on the tank, middle, and end of his motorcycle.

He rides on the highway of Khammam, his hometown, located in the state of Telangana. So far, he has not had any accidents.

Lachiram’s son G Govardhan says he was afraid when he first saw his father performing the stunts, but is now proud of him and wants him to continue.

Although Lachiram’s day job is as a farmer, he says he loves doing stunts and will keep on doing them for the next 10 or 15 years.

A Balance of Fear and Exhilaration 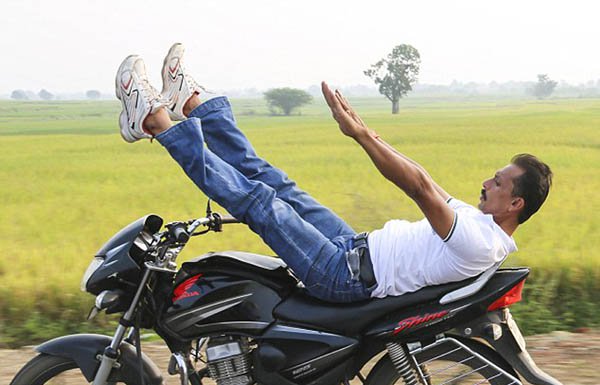 Admitting that many older people in Khammam don’t approve of his stunts, Lachiram says he still has plenty of support from the younger generation, who want him to continue performing. In fact, he plans to take his act to an even wider audience.

“My future plan is to perform stunts on a national level. I want to perform not for myself but for my nation,” he tells Barcroft.

Watch Lachiram in action below.

DISCLAIMER: Don't try this at home—or at all! Yoga is about self-care and non-harming, so be wise and stick to practicing on stationary surfaces.