The C concourse of Chicago’s Midway Airport is now a little more relaxing, thanks to its newly installed yoga room.

The studio, along with a new room for nursing mothers, is part of an ongoing effort to revamp both Midway and O’Hare to make them more appealing to travelers. The yoga room is unstaffed, but includes yoga mats and mirrors, and, most importantly, it’s free. Yoganonymous reports that the studio has a sustainable bamboo floor and a video monitor displaying different yoga moves, as well as soothing background music.

Andolino also added that since people today have a wide variety of choices in where they fly, they might start choosing airports based on amenities. In fact, she got the idea for the yoga room after seeing one at San Francisco International Airport.

“Many travelers will benefit from having a designated space to practice yoga, meditate, or just take a break from the sometimes very hectic airport environment,” she said in a recent statement. 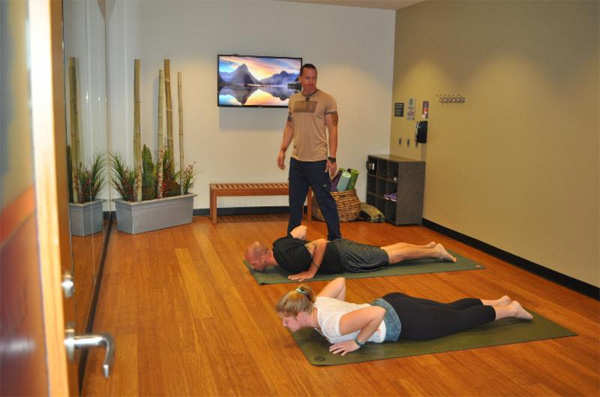 Yoga rooms in airports are one of the newest health and wellness trends. As we reported recently, London’s Heathrow Airport has added a yoga studio for travelers of SkyTeam Alliance’s 13 member airlines, and Chicago’s own O’Hare already has several new spas and its own yoga room, according to the Chicago Tribune. These spaces are designed to give travelers a respite from the crowds and stress of airline travel—and the spas probably don’t hurt the airports’ appeal, either.

What do you think? Would you choose an airport that has a yoga room over one that doesn’t? Do airport amenities really make that much of a difference to airline travelers?