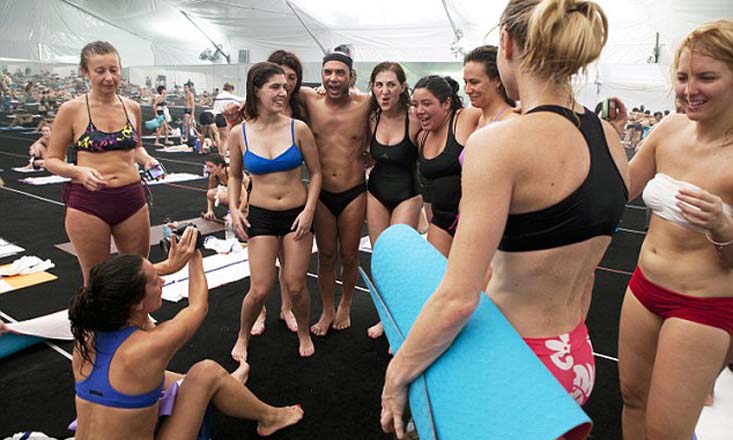 According to CBC News, Lawler’s suit alleges that during a nine-week intensive instructor training course that took place in Las Vegas in 2010, Lawler, who was then 18 years old, was in an evening meeting with Choudhury when she began massaging his feet.

Choudhury reportedly put his hand on her thigh, then attempted to put his hand inside her pants. The lawsuit alleges that Lawler “left the room in shock.”

“One night about a week later,” according to the lawsuit, “Choudhury insisted that Jill accompany him to his hotel room…where in addition to raping her…Choudhury demanded she say disgusting and untrue things, including: ‘Bikram you’re the best’ and ‘I want to f–k you all night long.’”

The sexual assault reportedly occurred again—once during the Las Vegas training session and several other times over the following years while Lawler was working at Choudhury’s studios, training in India, and at another training course.

Training with a Yoga Master

The Associated Press reports that Lawler had paid $10,000 from her college fund to attend the first training session at which she was allegedly assaulted.

Reportedly, Lawler was initially “elated” to learn from a legendary yoga master, but things took a different turn when she was expected to massage Choudhury “while watching Bollywood movies late into the night with hundreds of other students.”

In the lawsuit, she says that she felt there was nothing she could do about the alleged assaults, since she thought that the renowned yoga guru would retaliate by preventing her from working in his Vancouver studio and making it “impossible” for her to earn a living.

Lawler’s attorney, Mary Shea Hagebols, is also representing five other women who filed sexual harassment and sexual assault lawsuits against Choudhury in 2013 and 2014.

He himself has declined to comment thus far, but lawyers representing him and Bikram’s Yoga College of India deny that he ever sexually assaulted any of the women.