Ask a Yogi: What do Different Yoga Symbols Mean? 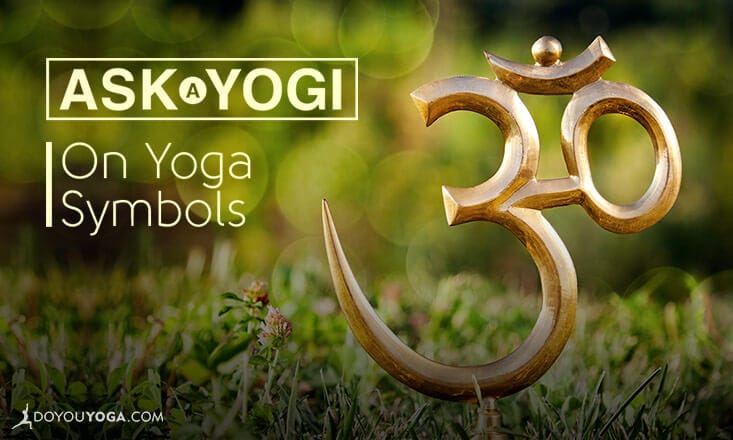 On your first time in a yoga studio, you might have seen a lot of symbols, decorations, pendants, and tattoos floating around the studio that seemed foreign to you.

While yoga isn’t technically a religion, there are a lot of common threads between yoga and Buddhism, Hinduism, and other eastern religions. Yogis tend to be deeply spiritual and believe that having these things around them brings good energy, luck, abundance, or simply represents their commitment to their practice.

The following is your beginner's guide to common yoga symbols.

This is probably the most recognizable yoga symbol. The sweeping symbol has a number of meanings. Largely, OM represents oneness, and the interconnectedness of all beings. OM, the sound, is chanted in yoga classes and is said to be the the noise that all beings would make if they sang out in unison. It is the sacred vibration of the whole universe.

Each piece of the actual OM symbol has meaning. The bottom of the large number 3-like shape represents the waking state. To the right of the “3” is the dream state. The top of the “3” is the unconscious state. The line above the main part of the symbol is illusion, and the dot above that is the absolute state. Together, these make the states of human awareness or consciousness.

108 beads make the mala. Traditionally, these beads are used as a tool for meditation.

Holding the mala in one hand, the meditator takes one breath in and out for each bead. As they move the beads through their fingers, they are able to keep track of their breaths without counting. This helps to keep the mind from wandering and promotes focus.

The tassel, which hangs off the guru bead (the large bead in the middle) alerts the meditator that they have come to the end of their session.

It’s no mistake that each mala has 108 beads, as this is a sacred number, not just in yoga but seemingly in everything. It has shown up time and again in various religions, and even science.

For example, there are said to be 108 sacred sites in India. In astronomy, the distance from the moon to the earth is 108 times the diameter of the moon. The same goes for the distance from the earth to the sun. Some instances seem more mysterious, such as Stonehenge being 108 feet in diameter. Today, many yogis challenge themselves to practice 108 Sun Salutations, particularly on the summer and winter solstice.

Each of the three digits are even symbolic alone: the 1 represents the individual, the 0 represents all beings, and the 8 signifies eternity. The list goes on, with instances of 108 and its multiples connecting us to something bigger.

When you see images of people meditating, you might notice that their hands are placed in a graceful gesture. These gestures, or mudras, each have a unique meaning and stem from Hinduism and Buddhism. Each mudra has a spiritual meaning, but they are also used to bring pressure to specific points of the body that correspond with certain organs, similar to reflexology.

One of the most simple and common mudras, Chin Mudra is the joining of the thumb and forefinger. This mudra is common during meditation and can be performed with the hands either facing up or down. The thumb is said to represent the universe and the forefinger the self. Joining the two symbolizes oneness.

A hand facing up is open to receiving the gifts of the universe. A hand facing down is rooting itself into the earth.

Another well known mudra, Anjali, is performed by bringing the palms and tips of each finger to meet, leaving a gap between the fingers of each hand. It is actually not the same as prayer position, which is a common misconception. It is a gesture of offering, a salute, done both at the beginning and end of a yoga practice. It is a way to honor both yourself and the practice.

At the end of yoga classes, many teachers will play the singing bowls. There are a few different kinds of bowls, but their purpose is largely the same.

Each bowl is set to a certain tone which corresponds with a part of the human body. The water in our bodies, which is a significant part of our being, according to yogic philosophy, responds to the energy of these tones. This connection of the body to sound creates a harmonious healing experience that brings us into alignment and possibly even bliss.

As you become more deeply connected to your yoga practice, you’ll likely find yourself drawn to these symbols. There are countless books that delve deeper into these subjects, but perhaps the best way to learn more is from those who have traveled the path before us. A yoga teacher training is a great place to start!

Which yoga symbols do you most relate to? Share with us in the comments below!