Ask a Yogi: What Are Mala Beads and Why Do Yogis Love Them? 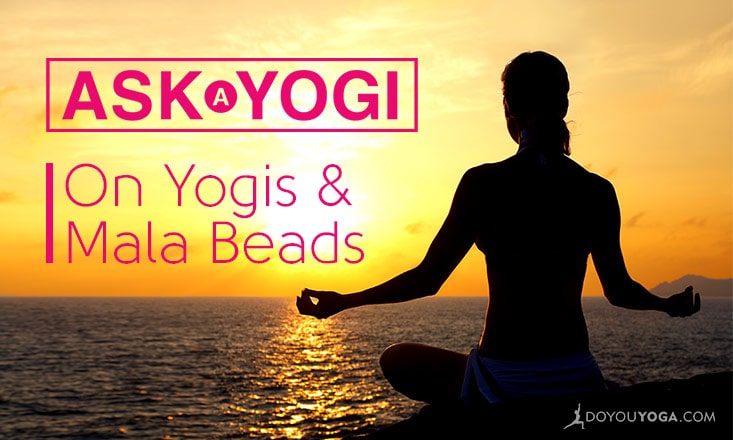 A mala is a necklace used traditionally in the Hindu and Buddhist religions, but also used in a yoga practice. Specifically, malas are used in a meditation practice.

What are mala beads?

Malas are necklaces made typically of 108 beads, a 109th bead often called a guru bead, and a tassel. The number 108 is thought to be an ideal 3-digit number, whose digits 1+0+8 add up to nine, which is another great number of three 3’s.

The numbers in the mala may also represent the universe as one thing (1), nothing (0) and everything (8, or infinity). Numerology, Hinduism and Buddhism as well as other eastern religions all have varying connections to the number 108 as well.

It is not atypical to see mala bracelets of 27 or 54 beads (digits of which still add up to nine), or a shorter necklace of 81 beads.

The 108 beads themselves can be made of many materials such as seeds, wood, or precious metals and stones. It is said that certain materials have properties that may be desirable such as grounding as is with the case of agate, or have associations with certain chakras, as is the case with jade.

If the meaning of the bead’s material is important to you, you may want to do some research before choosing your mala.

The guru bead is typically larger than the other beads, and its meaning and usage will be described soon. The tassel, as far as I was taught, is ornamental, but in some religions a tassel may represent a lotus blossom and represent enlightenment.

What are mala beads used for?

Mala beads are more specifically known as japa malas. Japa is a Sanskrit word that means repetition. Mala beads are usually used for the repetition of a mantra during meditation practice.

The mantra can be a word like Om, a phrase such as Om Shanti, or a deity’s name like Kali or Shiva. Mantras can be very personal so find one that speaks to you.

The mala becomes a tool used to keep focus during repetition of the mantra and as a way to count your mantras without having to keep an actual number in your head. And, let’s face it; staying focused on your meditation practice can be hard with all of our life’s factors attempting to interfere.

It is said that each mala will absorb and release energy gained during your yoga practice and meditation.

How would a yogi use them in practice?

Perhaps you are the type of yogi who wears their mala necklace or bracelet during the day, then during your yoga practice of the poses (asanas), you may choose to keep your jewelry on (or if you take it off, place your mala on a block near your mat. We try not to place the mala on the floor).

This is a great way to keep your mala involved as a part of your practice within a group class setting that does not focus on meditation.

How do I use them for meditation?

To use your mala during meditation practice, you will start your recitation of mantra at the first bead after the guru bead. Lay the mala over your middle finger, and clasp the bead with middle finger and thumb. The index finger is known as the finger with the ego attached, and ego should be left out of meditation.

So, the index finger points away from the hand and we try to keep it out of the way. As you clasp your first mala bead, you say your mantra and then move on to the next bead, usually pulling the beads through with the thumb. Repeat the same mantra. Do this until you reach your guru bead, however, do not recite your mantra using the guru bead. Pause, reflect, and turn around once at the guru bead and go back the opposite way.

As a final note, some practitioners believe that each mala should be used with only one mantra so as to keep the energy of that mantra within that mala; once a new mantra is used the energy must be rebuilt.