5 Things You Didn’t Know About Yoga 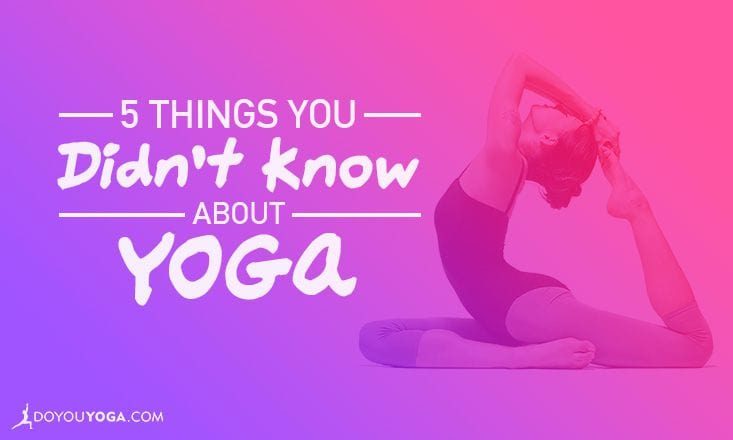 If you’re new to yoga, chances are that you have an idea in your mind about what it all means. You might have taken a class or two, followed some yogis on Instagram, or seen yoga classes play out on TV shows.

Odds are you’ve heard or read a lot of conflicting information about what yoga is. The reality is that even seasoned yogis might not have the full picture of what yoga and the yogic lifestyle are all about.

To help you sort it all out, we’ve put together a list of five things you didn’t know about yoga.

To a non-yogi, it could easily appear that the practice is a new-age exercise craze attracting hippies and lululemon wearing moms.

The truth is that yoga is an ancient practice with its first known exploration in 4500-2500 BCE. This ancient version of “yoga” was not a physical practice, but a study of the mind, breathing rituals, mantras, ethical values, meditation, philosophy, and a way of life. The physical practice that we recognize today as yoga began in India in 1700-1800. It was largely a practice performed by men.

How many times have you heard yoga teachers repeat a phrase every class, whether it be a cue like “roll up one vertebrae at a time” or a Sanskrit term like “Anjali Mudra, Prayer Position?”

As students, we assume that because our teachers have studied yoga to great extent, they are passing on accurate information. But just as gossip changes as it passes from ear to ear, ancient postures and phrases get muddied as yoga continues to grow in popularity.

For example, and contrary to popular belief, Anjali Mudra is not the same as prayer hands. In Anjali Mudra, we bring the palms to touch, but only the tips of the fingers touch, creating an opening in the hands. It is a symbolic gesture of honoring oneself and others.

Don’t blame your teacher for getting stuff like this wrong, as they were probably passed down to them this way. But, do start your own yogic investigations if you’re interested in staying true to the ancient practice.

3. Yoga Makes You Look Crazy, But You Won’t Care

Somewhere between the sweat dripping off your body and someone in class passing gas, you begin to let your guard down. Regularly practicing yoga is humbling and leaves little space to worry about looking silly.

For a newbie, the loud breathing, chanting, and body contorting can be pretty overwhelming. But if you don’t run for the closest exit, you’ll find that all of this “weird stuff” is actually doing some amazing things for your mind, body, and spirit.

Give it a year or two and you’ll be OM-ing right along with them.

4. Even if a Yogi Looks Like a Dirty Hippie, They Probably Have Impeccable Hygiene

Most serious yogis aren’t just showing up to class a few times a week. They are living a yogic lifestyle that incorporates all 8 limbs of yoga. The limbs (only one of which is the physical practice) include breathing, meditation, and guidelines for how to treat others and oneself.

The Niyamas, or rules for personal observation, include purity — meaning maintaining a cleanliness of our bodies and minds. To do so, many yogis follow the ancient Ayurvedic philosophy for a healthy life. This includes showering each day upon waking, swishing oil in the mouth and scraping the tongue to cleanse and fight disease, and using a dry brush to detoxify the skin.

So while they might look or smell a little funny (that’s probably the essential oils), devout yogis are typically clean inside and out.

How many times have you caught yourself cursing at the yoga teacher in your mind as you hold Pigeon for what seems like eternity? We all have the poses that make us want to roll up our mat and give up.

Our body and mind resisting this pose means that there’s some kind of physical, emotional, or mental blockage keep us from blissfully bending into it. If it’s a hip opener you dread, could it be that you’re not comfortable with the emotional release that it provides? If a back bend puts you off, could it be that you don’t want to allow your wounded heart to open?

The way we respond to a pose is always indicative of something much deeper, and usually something that we don’t necessarily want to deal with. But yoga pushes us to deal with our stuff, to let it all out and start to move on. While this can be frustrating in the short term, think how good it will feel when we finally nail that pose!

Gaining a full understanding of yoga takes years of practice and education. Yoga is a multilayered, ancient practice that needs to be studied like any other piece of history. The wonderful thing is that with its popularity, studying yoga and its history has become accessible to anyone.

What have you learned about yoga since starting to practice? Share with us below!