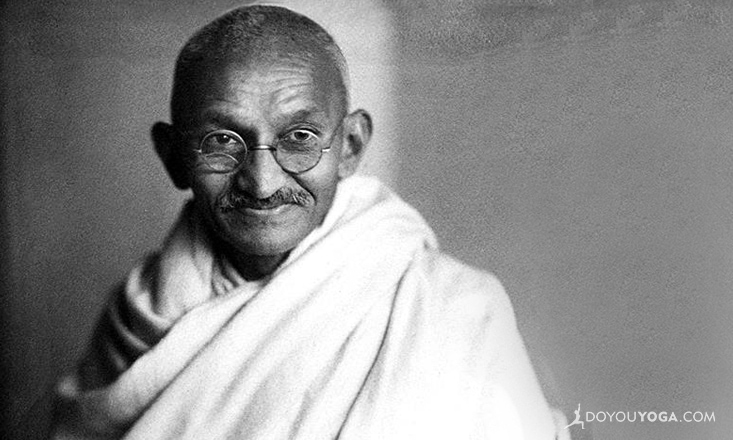 What is more inspiring than a man who gave up his freedom for the sake of civil rights? Stopped eating to urge unity between religious groups? A man who spoke deep wisdom from his soul and with his entire heart, over and over and over? Not much.

Mahatma Gandhi was born in India in 1869. He influenced the entire world with his non-violent civil disobedience acts, and drew immense attention to the injustices being played out between and toward Indians, but also toward minorities globally.

He shed light on the nonsensical violence between religious and political groups. Throughout his journey, Gandhi faced numerous acts of personal discrimination against his religious beliefs and race, particularly in South Africa. These acts led him to take action in a very big way.

Gandhi and the Non-Violent Protests for Unity and Peace

Over time, his peaceful demonstrations and acts of rebellion led him through many political and social accomplishments: he became the primary leader of India’s Independence Movement to separate from British colonial rule, he began the attempts at abolishing arranged marriages and caste systems in India, and he began to start obtaining equal rights for Indians living worldwide.

Gandhi demonstrated peaceful protests to encourage unity and peace between Hindus and Muslims and defied the law to protest the British Salt Act disallowing Indians to sell salt.

All were selfless acts that had a massive yet non-violent impact on humanity as a whole. His words have given hope and solace to many people from all walks of life, and the truths and realities his simple sentences speak are more inspirational than any poem found in any library.

Here are just a few empowering words and quotes from Gandhi to lift you up, inspire your day and help you hold on to hope:

1. An ounce of practice is worth a thousand words.

2. The difference between what we do and what we are capable of doing would suffice to solve most of the world’s problem.

3. You may never know what results come of your action, but if you do nothing there will be no result.

4. Service which is rendered without joy helps neither the servant nor the served.

5. The weak can never forgive. Forgiveness is the attribute of the strong.

6. Whenever you are confronted with an opponent, conquer him with love.

8. The future depends on what you do today.

9. Happiness is when what you think, what you say, and what you do are in harmony.

10. An eye for eye only ends up making the whole world blind.

11. Those who cannot renounce attachment to the results of their work are far from the path.

13. Nonviolence is a weapon of the strong.

14. To lose patience is to lose the battle.

16. Freedom is not worth having if it does not include the freedom to make mistakes.

17. Strength does not come from physical capacity. It comes from an indomitable will.

18. A man is but the product of his thoughts; what he thinks, he becomes.

19. Civilization is the encouragement of differences.

20. You must not lose faith in humanity. Humanity is an ocean; if a few drops of the ocean are dirty, the ocean does not become dirty.

To this day, Gandhi’s words are still used to inspire many people worldwide. His quotes don’t need hours of thought to procure their depth, showing that the underlying thoughts behind his words are simple depictions that we all understand and know to be true.

What are your favorite Gandhi quotes?