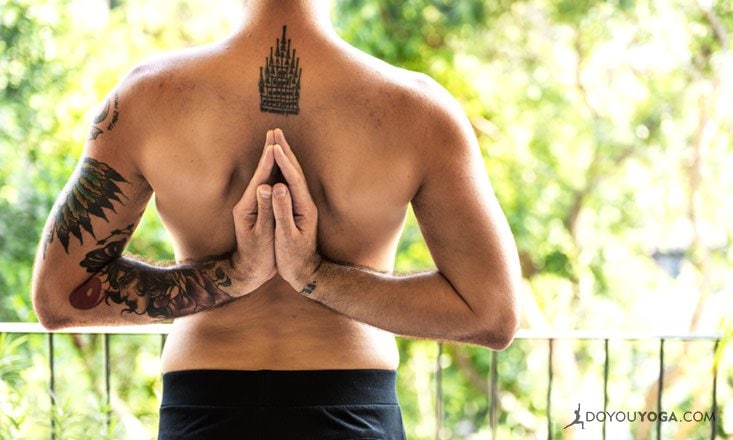 Occasionally, the person who guides your meditation group, yoga classes, or yoga philosophy discussions may use Sanskrit yoga terms without identifying what they actually mean.

We’ve all been there: “The what now? What did he say? Was I supposed to bring a dictionary? Does everyone know what that means except me?? Does anyone have the google app loaded into their mat?”

In your yoga asana classes, you can tell if it’s a posture name based on the word ending with “asana” meaning “pose”, but all the other sprinklings on that yummy cupcake might be lost on you without a little DOYOU-Sanskrit-to-English-Dictionary help.

So here you are, a quick explanation of some commonly used Sanskrit yoga terms that you may hear your teachers mention, play with, and discuss.

“Ignite your Bandhas” is a reference to the locking or contracting of various muscle groups. The obvious contractions in your yoga practice would be that of the abdominal wall and the pelvic floor, but there are many more, and each have their own name ending with “-Bandha.”

The Sutras are the philosophies that tie (or sew) the traditional Eight Limbs of Yoga together. They are consistently studied and interpreted by philosophizing yogis and yoginis, as they provide advice on how to live ethically, and thus, find true happiness. You can check them out here.

Often used as a meditation aid, they are usually intricate circular works of art that symbolize the entire universe. Traditionally, these were used in Buddhism and Hinduism, where there would be a square with a circle around it and some reference to one, or even two, relevant deities.

Jnana is knowledge that is acquired through meditation.

Personally speaking, prana is our individual life force. It is often depicted as the breath because of the name “Pranayama” given as a title to all breathing exercises. But actually, looking more closely, prana would be your breath, your blood, your heart, your food, your water — everything that keeps you living.

Shodhana means “purification” or “to purify.” Nadi Shodhana is a type of cleansing breath also known as Alternate Nostril Breathing used at the start or end of a detoxifying practice. You can learn more about this breathing technique here.

Refers to being liberated from reincarnation. Being released from the state of rebirth is an ultimate goal in many Indian religions. It is thought to be transcendent and given only to those enlightened enough to receive it, and pure enough to deserve it.

The fundamental function, character, or nature of something. Buddha’s teachings are often referred to as Dharma because they are thought to be the intrinsic nature of the world. Dharma is the bottom line, the principle of existence.

Hopefully this will help you feel more yoga-confident with this knowledge under your belt! Go forth and enjoy your dictionary-free, and google-free yoga practice!